SINGAPORE - Step into the departure hall of Changi Airport Terminal 4 and a large, wide space greets you.

The absence of obstructive pillars is made possible by a huge steel framework overhead extending across 60m.

It is one of the features that helped engineer Lai Huen Poh bag top honours at the Building and Construction Authority (BCA) Design and Engineering Safety Excellence Awards this year.

He is one of six winners, with four others receiving merit honours, said BCA on Sunday (May 13). The 10 individuals will receive their awards on May 22.

Mr Lai, senior managing director at RSP Architects Planners and Engineers, will attest that such building feats do not come easy - and they have even modified his own "roof". "Each project (gives) me a patch of white hair," quipped the 63-year-old.

His other projects include Republic Plaza and Wheelock Place.

Given 30 months to complete the airport terminal, which opened in October last year, Mr Lai and his team used prefabrication methods to manufacture most of the structure off-site before assembling them on-site. 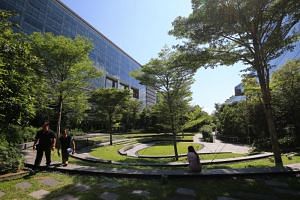 A unique "hat first" technique - where, after the completion of the roof, construction starts from the centre and proceeds outwards - made sure other works could start quickly.

This included an early installation of the baggage handling system, designed to handle the check-in luggage of about 16 million travellers a year.

The sophisticated system takes up almost a floor's worth of space beneath the departure hall on Level 2, said Mr Lai, and is "a labyrinth of conveyor belts... like spaghetti". It was a big consideration during the building process, he added.

Other features of the construction included a "magic carpet" - a mobile hanging platform girded along the roof that was used to install glass panels on the ceiling for natural lighting.

Another winning project saw the temporary diversion of the Singapore River to ensure smooth tunnel boring works of the Downtown Line from Chinatown to Fort Canning stations, which were opened last year.

This was to clear obstructions such as existing river wall piles used for embankment works, and debris such as timber, steel and concrete below the river bed, said engineer Tan Yoong Heng, who oversaw the project with Ms Cheryl Lee.

Both of them, from engineering consultant company Arup, won the BCA Design and Engineering Safety Excellence Awards as well.

The construction's proximity to existing and historical buildings such as the National Museum, as well as building under and over operational MRT lines, posed challenges too.

The underground line also had to be built along a narrow strip in Upper Cross Street between the State Courts and Housing Board blocks.

The impact on the blocks had to be meticulously studied, said Mr Tan. At one point, the MRT tunnel is a mere 64cm away from the foundations of an HDB block - a distance slightly longer than the length of a copy of The Straits Times.

Engineering may be hard and long work, said RSP's Mr Lai, but he makes it a point to get in tune. "It is like conducting an orchestra and presenting a Mozart piece," he said.