It was once Singapore's tallest residential building and remains a landmark four decades down the road, but the horseshoe-shaped Pearl Bank Apartments could well fall victim to a demolition crew.

The building - sold to developer CapitaLand in a collective sale last Tuesday - will likely not be conserved despite the wishes of heritage lovers and the Singapore architect who designed it.

However, CapitaLand promised to "look into blending the heritage elements with modern aesthetics" in the new building to "reflect the rich, multifaceted culture of Chinatown".

Pearl Bank Apartments was sold to CapitaLand for $728 million, making it fourth time lucky for the condominium in Outram Park.

Pearl Bank's architect, Mr Tan Cheng Siong, 81, told The Straits Times on the day the deal was announced that it is his "hope and desire" that the new owner will conserve the tower.

"The redevelopment formula does not have to comprise only tearing down a structure, especially if the original building has high architectural and heritage value," he added.

Other architects also called for the condo to be conserved, citing its unique architecture and design, as well as its historical significance.

After all, the building was among the pioneers of high-rise, high-density living here.

The Urban Redevelopment Authority had said previously that there are merits in Pearl Bank's conservation, given that the building set standards for later condo developments on provision of communal amenities such as common areas, clubhouses and shops.

"While Pearl Bank Apartments - completed in 1976 - has been a visible landmark in Outram, the ageing building no longer adequately meets the residents' needs, and the costs involved to upkeep the premises are high," Ms Seet added.

She noted that it costs about $2.5 million to maintain and repair key facilities every two years.

As MCST chairman, she has had to deal with numerous complaints from residents over leaking pipes that caused flooding and sparked quarrels among neighbours.

There were 84 cases of pipe leaks last year and more than $20,000 was spent on lift maintenance.

There are also no barrier-free access features in the building, making it an unfriendly environment for some elderly residents.

These were some of the reasons most owners had agreed to a collective sale as early as 2007, said Ms Seet. Owners had attempted three sales - in 2007, 2008 and 2011 - that failed, possibly due to poor market timing. 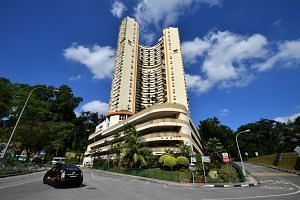 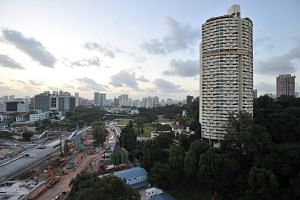 Ms Seet said those failed attempts and the reality of an ageing property in need of repairs likely prompted more than 90 per cent of the owners to back a proposal to conserve the building in 2015.

Back then, the owners had wanted to increase its gross floor area and sell this extra space so a developer could build a second apartment block on top of their five-storey carpark. The proceeds would have allowed the owners to retrofit the existing building, but there was not enough backing for the proposal.

Unit owner Edward Phang said some owners were not keen on the conservation plan as they would have had to live with the noise and dust from the construction of the new building and the decrepit state of the old one.

"There are a lot of repairs needed and I have received six to seven complaints on water seepage. It is everyone's prayers for the en bloc to go through," said the retired doctor.

CapitaLand said it plans to redevelop the site into a high-rise project of around 800 units, with a finish date in early 2023.

Mrs Phang noted: "I like the exterior design of the building and I admire the architect's talent. But the discussion about fighting for heritage is from observers, and we owners have to bear the financial and ill-health costs that come with any construction, which is unsustainable.

"I think the best way out is for the new building to be redeveloped in a way that preserves the essence of the architect's design - its circular structure - and allows new units to have the existing great views."

A version of this article appeared in the print edition of The Sunday Times on February 18, 2018, with the headline 'Pearl Bank may not be spared the wrecking ball'. Subscribe
Topics:
More
Whatsapp Linkedin FB Messenger Telegram Reddit WeChat Pinterest Print Purchase Article Copy permalink