This means that the wall dividing a kitchen from the rest of a flat's living space will no longer be offered under the Optional Component Scheme, where buyers pay for additional features such as floor finishes, sanitary fittings and room doors.

At the last BTO exercise in August, the cost of partition walls ranged from $370 to $710 per unit.

Announcing the move in a statement on Sunday (Feb 4), HDB said the move comes as open kitchens have become de rigueur.

The provision of open kitchens "offers home buyers greater choice and flexibility in how they want to use and design the space, and lay out their furniture to better suit their lifestyle needs", said the statement.

"It also saves them the hassle and cost of hacking the partition walls to create an open kitchen layout. Flat buyers can also choose to use cupboards and shelving creatively to define the kitchen and dining/living room area if they wish," HDB added.

Open kitchens were first made available as an option at the launch of an Ang Mo Kio BTO, Teck Ghee Parkview, in September 2012, and at subsequent BTO launches from September 2013.

When marine operations manager Mohan Raj Velippan, 30, moved into his four-room apartment at Teck Ghee Parkview last May, he wanted some form of partition "as Indian cooking is quite heavy and we didn't want the smell of the spices to go out of the kitchen".

So he chose an open kitchen and later got a contractor to install glass panels, which cost about $3,000. Now, he and his wife now enjoy a light-filled kitchen, which “helps make our flat look less tight".

Meanwhile, neighbour Clay Chua, 30, chose an open kitchen so he could erect an island with a bifold window. The window can be closed during heavy-duty cooking, and left open when the counter needs to double up as a dining table. His entire kitchen set him back close to $5,000 without appliances. 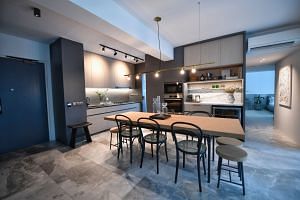 A peek into designer HDB flats owned by interior designers 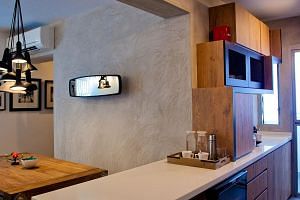 The ST Guide To... buying your first apartment

"It's definitely more spacious at the end of the day," said the business consultant of his investment.

Of the 108 projects launched for sale from September 2013 to November 2017, located in estates such as Toa Payoh and Yishun, 94 offered the open kitchen concept.

Moving forward, the HDB will automatically leave out wall partitions for kitchens in all upcoming BTO projects, where possible.

But aspiring home owner Naomi Lim, 25, wondered if those who are satisfied with walls have to turn to a more expensive option now.

"My fiance and I are on a budget, so I would have felt better if the HDB continued to offer this under the Optional Component Scheme," said the graduate student.

Going wall-free for kitchens is the latest move by the agency to encourage more open and flexible layouts. Last September, it pledged to apply "urban design solutions that are found to be technically feasible, cost-effective and well accepted by residents" to other housing precincts, such as tucking structural walls to the edge of a flat.

The public can view HDB's show flats with the open kitchen concept at the HDB Hub. They can also be viewed online on the HDB InfoWEB, or via the Mobile@HDB app.