SINGAPORE - Mr Yeoh Seh Dong, 69, had to give up his canteen-helper job three years ago because of poor health.

Surgery on his neck affected his movement and hearing, and he has had health issues since being diagnosed with nose cancer 12 years ago.

The loss of his income meant he and his wife, Madam Koh Kim Keow, 68, a cleaner, decided to move from a five-room flat in Marsiling to a two-room Flexi flat in Kampung Admiralty with a 30-year lease.

They did this under the Housing Board's two-room Flexi scheme.

Under the scheme, flats are offered under 99-year leases to families, singles and older applicants. But applicants who are 55 years and above can opt for leases of between 15 and 45 years.

The 40-year lease was the most popular, with 1,620 buyers. Only about 100 opted for the shortest lease of 15 years, with the oldest buyer being 95 years old at the point of application. 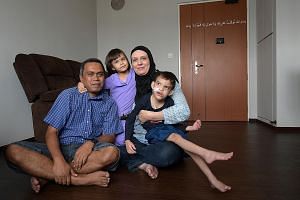 A home of their own, for 3,000 tenants of rental flats 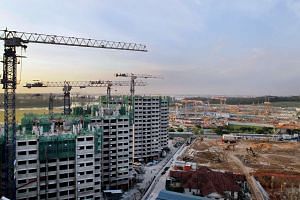 HDB stipulates that those 55 and above can take up a shorter lease as long as it covers the applicant and his spouse up to the age of at least 95.

Mr Nicholas Mak, executive director of property consultancy SLP International, said this requirement could explain why the 40-year lease is the most popular, as applicants past 55 ensure their lease extends until they are 95.

While circumstances meant Mr Yeoh and Madam Koh made the switch, they were happy to do so as it gave them more financial security, especially for Mr Yeoh's medical bills.

He visits various specialists each month for his condition, but is not certain about the exact cost of the bill as it is mostly covered by insurance.

Besides, their three children, all in their 40s and married, have already moved out of their Marsiling flat for the most part of the past 20 years.

The couple bought their Kampung Admiralty flat for about $100,000 and spent about $10,000 renovating it. The Marsiling flat was sold for about $400,000, and the couple intend to keep the balance for their living expenses in their old age.

Mr Mak said such moves are in line with the aims of the scheme. "With this flexible shorter lease, the Government is encouraging the elderly not to put too much of their nest egg into an illiquid asset like real estate."

Even though Mr Yeoh and his wife miss the bigger space in their previous home and the sea view, they are happy with their new home, which they moved into last December.

Madam Koh said in Mandarin: "It is much quieter here in Admiralty, and we like the proximity to the MRT and amenities, and sheltered areas."

Mr Yeoh added: "The No. 1 thing here is the location."

They are also pleased with the elder-friendly grab bars in the home, which came fitted with the flat.

More two-room Flexi flats will be launched in the May Build-to-Order project. This month, 657 such flats were made available in Choa Chu Kang, Geylang and Woodlands.

ERA Realty key executive officer Eugene Lim said: "Ultimately, the two-room Flexi scheme aims to provide elderly flat buyers with a relatively cheap option to downsize, and, in this regard, it has delivered."