A new scheme for families living in rental units after being forced to sell their flats can help them move out of poverty, social workers have told The Straits Times.

He also suggested a Fresh Start Housing Grant to help such families purchase their flats, as well as providing counselling for issues such as jobs, relationships, education and drugs.

However, the grant would be "not without conditions". 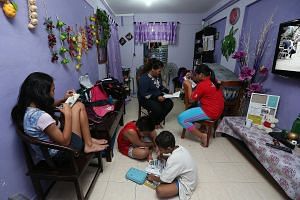 Divorcee longs for a place to call her own

Experts believe that home ownership will encourage families to develop more stable employment and relationships, as well as keep their children away from unsavoury influences which rental-flat environments can bring.

While the details are still being worked out, Mr Lee said the two-room flats will come with shorter leases and stricter resale conditions to make them more affordable.

Ms Petrine Lim, principal social worker at Fei Yue Family Service Centre, believes that flat ownership will take housing woes out of the equation and allow families to focus on fixing other problems.

She said: "It's only right that (the flats) have stricter resale rules so the families cannot revert to the same cycle of selling the flat and moving back into rental units. It's only fair so the problem is less likely to recur."

Mrs Shelen Ang, head of research and development at charity Focus on the Family Singapore, said: "It is encouragement that they won't be stuck in this cycle of poverty."

Ms Denise Phua, an MP for Moulmein-Kallang GRC, who chairs the Government Parliamentary Committee for Social and Family Development, said that many of the families being targeted for assistance could have sold their first flats because of financial hardship or divorce.

While the Housing Board and the Ministry of National Development said yesterday that the scheme will target families with young children, some urged the authorities to consider helping divorcees as well.

"The children would learn from other children and the extended family members would also give instructions to the children," he said.

Social workers backed the safety nets associated with the scheme and grant, such as stricter resale conditions and how the grant, if introduced, would include counselling, among other conditions yet to be specified.

"It is not just about owning a flat again. It is the whole scheme of things to help these families deal with any recurring issues," said Mrs Ang.

Mr Donald Han, managing director of property consultancy Chestertons Singapore, suggested a shorter lease of about 30 years compared with the usual 99 years on a HDB flat.

"These parents would likely be in their 40s, so in 30 years, they would be in their 70s and would have their children to support them, or they could have upgraded (their flats) by then," he said.

National Development Minister Khaw Boon Wan said yesterday that he is confident details for the scheme can be sorted out over the next few months so implementation can begin next year.