SINGAPORE - The Housing Board has seen an increase in reports of popped or dislodged tiles in flats, with about 700 cases reported in the first half of this month alone.

HDB said this is "consistent with the experience of previous years" where there tends to be a higher number of feedback on the dislodgement of tiles during the colder months.

The number of cases is about a third of the total reported in the whole of 2016. The Ministry of National Development had said in response to parliamentary questions in April last year that HDB received about 2,000 cases of dislodged floor tiles every year in the past two years.

The Straits Times had reported about a recent spate of popped tiles in flats across the island, in areas like Sengkang, Woodlands, Bukit Panjang, Toa Payoh and Jurong West. The cases, which occurred in the past week when temperatures dipped below 22 deg C on several days, raised questions over whether the tile dislodgement was linked to the unusually cool weather.

"Dislodgement of tiles occurs due to natural deterioration and differential thermal expansion or contraction of the tiles, which results in a loss of adhesion between the tiles and the screed surface over time," said a spokesman for HDB.

She added that significant changes in temperature can also cause "more stress to be built up beneath the tiles and contribute to the loss of adhesion".

Flat owners had renovated their own flats using their own tiles in nearly half of the 700 cases reported in the first half of January. The rest were installed by HDB. 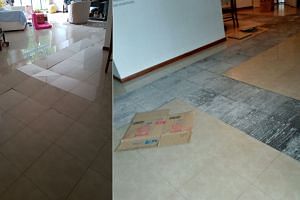 Why do tiles pop and how to get them fixed

In the past week, temperatures dipped below 22 deg C on several days. Home owners posted on Facebook about tiles in their homes popping over the weekend, with one Woodlands resident saying 38 flats in his estate were affected.

Mr Lewis Sua, who lives at Block 688C, Woodlands Drive 75, told The Straits Times that there were at least 14 flats affected in his block alone, and 38 if he included flats from the surrounding blocks.

"On Sunday, one of my neighbours came and asked around if anyone was affected," said the 37-year-old condominium estate manager. "When he came to my unit, the tiles were still OK. But five to 10 minutes later, my wife went to the kitchen and we started to hear firecracker sounds - the tiles in our living room popped."

HDB said it will "continue to offer goodwill repairs for the tiles up to 15 years" for flats with tiles laid by HDB.

"This exceeds the industry standard of a one-year Defect Liability Period," it said. "HDB will also assist all affected residents to inspect their flats, lay protective sheets over the affected tiles and provide a list of repair contractors whom they can engage."

Holland-Bukit Timah GRC MP Liang Eng Hwa told ST that he intends to make a proposal to MND to ask if HDB could offer microloans to residents who need help with the repairs that can cost up to $8,000.

These residents are those whose flats are older than 15 years, and who do not qualify for lower-income subsidies, said Mr Liang, who oversees the Senja, Jelapang and Segar areas in Bukit Panjang, where residents have reported cases of popped tiles.

He said: "I hope HDB can offer microloans and the residents can pay it back over a period of time."