The Housing Board will launch two new Build-To-Order (BTO) projects in the waterfront district of Punggol Point this month, each with designs that hark back to the town's rich history.

The first, Punggol Point Crown, is inspired by the old Ponggol Zoo that was located near the Strait of Johor between the late 1920s and early 1940s, and owned by the late William Lawrence Soma Basapa.

The other project sees the launch of the second phase of the seafront Punggol Point Cove, whose design draws reference from Punggol's first incarnation as a fishing village.

HDB will roll out the two projects, which comprise 2,724 flats, in its September sales exercise.

Flats available range from two-room flexi to five-room flats, and the projects are expected to be completed in 2024.

Punggol Point is envisioned to be a district that embraces nature and pays tribute to Punggol's history, the HDB said in a statement yesterday.

The 1,545-unit Punggol Point Crown is divided into five thematic zones based on the natural habitats of the animal species that lived in Ponggol Zoo. The main reason I applied for it was the sea view. I also like that we will have the sky bridges as it means I will have a good viewing deck to look out to sea.

MR LYE CHUNG YEW, 43, who secured one of the 1,172 units in Punggol Point Cove's first-phase launch. He currently lives in Punggol.

Communal living and play areas, as well as landscaping, will reflect these design themes.

For example, the playground in the Shoreline zone will include climbing elements reminiscent of stepping stones and boulders, as well as motifs of wader birds and fish, HDB said.

Meanwhile, the 1,179 units in Punggol Point Cove's second phase will be housed in residential blocks built with a wave-like structure, in a nod to their seafront location. 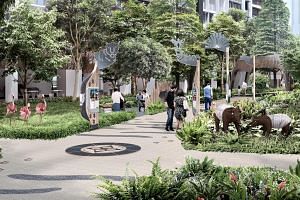 Ponggol Zoo gone, but not forgotten

Old Punggol Road to become heritage trail: Did you know there was a zoo in Punggol? 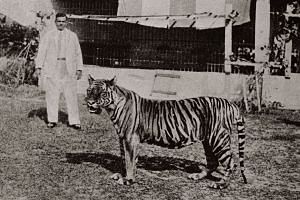 In recognition of Punggol's rustic village past, each block will have its own courtyard and be linked to other blocks by a series of 10th-storey sky bridges.

Mr Lye Chung Yew, 43, who secured one of the 1,172 units in Punggol Point Cove's first-phase launch, is looking forward to moving in.

"The main reason I applied for it was the sea view. I also like that we will have the sky bridges as it means I will have a good viewing deck to look out to sea," said Mr Lye, who works in the oil and gas sector.

Mr Lye, who currently lives in Punggol, has fond memories of the Punggol Point Jetty area and recalls camping there in his primary school days.

"Back then, it was still all forested and I remember during low tide, we went out to the beach to collect sea shells," he said. "It's a plus point for me to see Punggol's history reflected in the design of the projects as well."

Punggol Point residents like Mr Lye will also have the Punggol Coast MRT station, which will be ready in 2023.

They will be able to make use of the recreational facilities at the nearby Punggol Point Park and Jetty, Punggol Promenade and Coney Island.

HDB said residents can also look forward to more retail and employment options in the Punggol Digital District to the south of Punggol Point from 2023.

Punggol Point is the fifth of seven waterfront districts planned for Punggol Town, which will have 11 districts in total.

A version of this article appeared in the print edition of The Straits Times on September 02, 2019, with the headline 'HDB to launch over 2,700 flats in Punggol Point for sale'. Subscribe
Topics:
More
Whatsapp Linkedin FB Messenger Telegram Reddit WeChat Pinterest Print Purchase Article Copy permalink