Housing Board resale flat prices edged down 0.2 per cent in the fourth quarter of last year, resulting in a full-year price drop of 0.9 per cent, according to HDB's flash estimates released yesterday.

This means the price decline last year was more gradual than the 1.5 per cent slide in 2017.

The final figures, with more detailed data on public housing, will be given on Jan 25.

HDB also said it will launch its first Build-To-Order (BTO) exercise for the year next month, offering about 3,100 flats in Jurong West, Kallang/ Whampoa and Sengkang.

There will also be a Re-Offer of Balance Flats exercise.

OrangeTee & Tie head of research Christine Sun traced the dip in the fourth quarter's HDB resale prices to concerns over the depreciating value of older flats and last July's property cooling measures, which included a tightening of loan limits. Another factor she highlighted was the increased supply of HDB flats entering the resale market after reaching the minimum occupation period (MOP). "The decline in overall prices has been moderate, as there were more non-standard flats reaching MOP and being sold at relatively attractive prices in recent months," she said.

Some of them include executive apartments, terrace houses, units built under the Design, Build and Sell Scheme and flats at Pinnacle@ Duxton, she added.

Looking ahead, Huttons Asia research head Lee Sze Teck said HDB resale prices, which have been declining since 2013, are likely to continue sliding this year.

That is because the ramped-up supply of BTO flats sold in 2015 and 2016, as well as several executive condominiums and private residential projects, will be ready this year.

"HDB upgraders will have to sell their current flats within six months. This year, transaction volume looks set to be slightly higher than last year, but prices are likely to stay in the range of minus 1 per cent and 0 per cent," he said.

Ms Sun said that with more HDB resale flats reaching the MOP this year, resale prices could slip further. But this could be countered by fewer BTO flats being launched, and the Government possibly allowing buyers to use a bigger proportion of their Central Provident Fund savings to buy older flats. 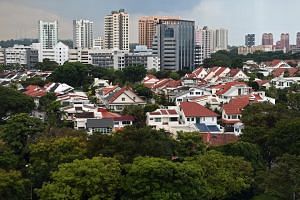 She expects resale prices to hover between zero and minus 2 per cent for the whole of this year.

Others were more optimistic.

ERA Realty key executive Eugene Lim projects HDB resale prices to rise, at most, by 1 per cent. Factors he cited include the lease decay issue - in which the value of an HDB flat is expected to hit zero as it nears the end of its 99-year lease - being largely addressed by the Voluntary Early Redevelopment Scheme.

Other factors include the authorities looking at making the use of CPF funds more flexible for buying flats with shorter leases.

"Resale flats are still an attractive option for buyers, with generous grants from the Government. They are also the only way for buyers to buy a flat in their location of choice."