SINGAPORE - (THE BUSINESS TIMES) Property developers of newly acquired collective-sales sites now have to obtain an additional layer of approval from the Land Transport Authority (LTA) to ensure that their proposed increase in number of dwelling units does not exert undue pressure on existing infrastructure.

Property consultants say the need for this extra paperwork - called the pre-application feasibility study (PAFS) - had taken effect earlier this year, but was only formalised in a circular to the industry on Monday.

Analysts believe that it may temper en bloc fervour slightly and cause developers to exercise more caution in their bids.

As for developers of projects yet to have obtained their outline planning permission, provisional permission or LTA's clearance for transport impact assessment before Nov 13, they may find their profit margins affected if they fail to get approval for the number of units they had originally planned to build.

DBS senior vice-president for group equity research Derek Tan said the transport impact assessment may put a cap on the maximum number of units allowed in a development.

"This new rule will taper expectations somewhat, especially for aspiring owners of larger sites. It is no longer going to be a straightforward mathematical calculation where an increased buildable gross floor area translates to an expanded number of units. (Collective sale) prices will come down, but I think it is a small hurdle to cross for now, and the moderation in prices won't be too much."

Developers submitting outline or development applications for en bloc proposals to the Urban Redevelopment Authority (URA) now have to consult LTA and submit a PAFS to ascertain the maximum number of units they can build. 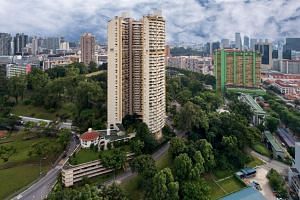 This is to ensure that the enlarged incoming population size will not strain the existing road network and cause congestion and inconvenience for other residents.

The study should assess the traffic impact on the area and propose car-lite initiatives, traffic demand management measures, and feasible transport improvement plans to support the redevelopment proposal.

Among developers BT spoke to on Tuesday, City Developments and Kingsford Huray Development said they have engaged consultants to commence traffic impact studies for Amber Park and Normanton Park respectively.

Oxley Holdings managed to obtain its approval - to build about 1,450 units for Rio Casa and 1,050 units for Serangoon Ville - before the Nov 13 deadline.

Former HUDC estates, which tend to be huge under-built swathes of land, have featured strongly in this year's list of awarded collective sales, with successful developers hoping to intensify the number of units by three to five times the existing capacity (See table above).

Upon redevelopment, the resultant number of units for each of these sites, if approved, run into the thousands.

Knight Frank's head of investment and capital markets Ian Loh said: "These HUDC homes, built 20-30 years ago, are quite sizeable at 1,400 to 1,700 sq ft each. Today, developers generally calculate the maximum number of potential units by assuming unit sizes of 70 sq m or 100 sq m (753 sq ft to 1,076 sq ft) each - about half the original size because of the changing needs of people nowadays."

One consequence of this new ruling is that the responsibility of engaging a traffic consultant to assist in obtaining approvals from URA and LTA could shift from the developer after the sales process to the real estate agencies representing the owners prior to the sale, CBRE head of research for Singapore and South-east Asia Desmond Sim said.

"This is similar to how URA prescribes the maximum number of allowable units for government land sales sites. Right now, it is not common for owners or the sales committee to undertake this task, but they may opt to do it in future to give interested buyers the confidence and peace of mind to bid."

Amid upward spiralling land prices, URA has also been seeking detailed information on the tender results of private-sector en bloc sales from marketing agents, which some think could be its way of keeping closer tabs on the heating sector.

While they recognise that the objective of the latest rule is to ensure sustainable development of estates and infrastructure, they also mull the potential cooling impact this may have on the en bloc market, however slight.