Housing Board on mission to innovate and build flats that are not just functional, but cater to changing aspirations

Smart-enabled homes with built-in smart power sockets and sensor-equipped lights in common areas are some new features residents in the upcoming Punggol Northshore district can look forward to.

Owners of these smart homes will be able to control just about any appliance that is connected to a power source - fans, lights and coffee machine - through a mobile application.

Within the estate, smart lighting will rely on sensors to automatically dim and brighten based on human traffic, which saves energy in the long run.

These features will also be found in new flats in the upcoming "forest town" of Tengah, the first of which are due to be completed in end-2022.

The Housing Board does multiple behind-the-scenes trials of these new technologies before they are rolled out, as part of its drive to improve the HDB living environment.

The man heading these efforts, Dr Johnny Wong, told The Straits Times that all new ideas go through stringent testing at the HDB's building research facility in Woodlands to ensure they are technically feasible, cost-effective and comply with current building regulations.

Dr Wong, who is group director of the Building and Research Institute, set out how HDB homes have evolved over the years and adopted new technologies, in an interview last Friday to mark the board's 60th anniversary this year.

While the HDB's earliest flats built were simple and utilitarian, its goal now is to provide smart and sustainable homes that are not just functional but also cater to the changing aspirations and concerns of the next generation, he said.

"There's a big thing that we need to check. Will residents accept and like it?" he noted.

That is where "living laboratories" - existing estates with residents living in flats - come in.

Yuhua and Teck Ghee estates are two such examples. 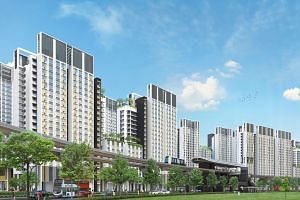 Among the systems trialled was a pneumatic waste conveyance system, which uses vacuum-type underground pipes to automatically gather household garbage.

In Yuhua, residents complained of foul-smelling rubbish chutes not long after the system was installed, as bulky waste caused chokes.

Following the feedback, Dr Wong said the HDB found the root of the problem, corrected it and further refined the system. The improved system is now among the slew of sustainable features that will be incorporated in new flats in estates such as Punggol Northshore and Tengah.

He sees the HDB's commitment to sustainability as a "social responsibility", as eight in 10 Singaporeans live in an HDB flat today.

"Singaporeans are very exposed to what is happening around the world. Sustainability is not a fashionable word; it's something that a lot of our young people are concerned about so I think they feel that agencies like HDB, in a certain way, must also do their part," he added.

He noted that HDB developments were planned to be sustainable from the beginning, even before the term "sustainable" was used to describe them.

For instance, HDB flats are designed such that corridors are naturally lit during the day. Homes are designed and positioned to be naturally breezy and ventilated, to minimise the use of air-conditioning.

The incorporation of void decks was particularly successful, he said. "Right from the beginning, the architects got it right because the porosity of void decks allow wind to flow through our buildings and towns," he added.

In a Facebook post yesterday, Prime Minister Lee Hsien Loong said "many families lived in crowded, squalid conditions" when the board was first established.

"HDB hit the ground running to build homes for Singaporeans," he said. "Each new generation has brought different needs, lifestyles and aspirations, and the HDB has continued to innovate and adapt with them. Today, HDB focuses on building community-centric towns, paying special attention to sustainability."

Dr Wong said the first eco-precinct in Punggol, Treelodge@ Punggol, was built "very modestly" back in 2010, but technology has since improved significantly.

"Frankly when we started, we didn't expect that smart technology would come in such a big way as it did and we quickly capitalised on it," he said.

"The end result in today's Punggol estate... turned out more than what I expected. It's very satisfying but it's always a work in a progress."