SINGAPORE - A decorative panel fell 40 storeys from the top of a Housing Board block in Bendemeer Road last Saturday evening (June 23).

No one was hurt in the incident, which happened at Block 10B Bendemeer Road at about 7pm.

In response to queries from The Straits Times, the Housing Board and Jalan Besar Town Council said they were informed about the incident at around 10pm.

"The panel is part of the block facade design and is non-structural. The building is structurally safe," they added in a statement on Tuesday.

The ground floor area beneath the facade has also been cordoned off and checks on neighbouring blocks with similar facade features have also been conducted as a precautionary measure, said HDB and the town council.

Investigations are ongoing and rectification works will be carried out, they added.

A witness, who wanted to be known only as Ms Li, told Chinese-language newspaper Shin Min Daily News last Saturday that she was watching television in the living room with her family members when they suddenly heard a loud crash.

She had initially dismissed it as sounds from a nearby construction site, but a neighbour later sent her a photo of a decorative panel that had fallen 40 storeys down their block onto a grass patch next to the playground.

According to the photo, the panel appears to be about 1.2m long and 30cm wide.

Police officers cordoned an area roughly half the size of a basketball court for about 17 hours since Saturday evening, Shin Min said. 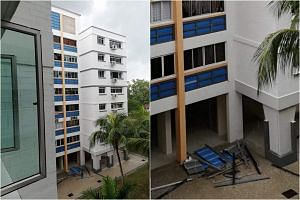 Decorative structure on HDB block in Pasir Ris falls from 8-storey height; no one injured

This is the second such incident reported this month.

On June 18, a decorative structure on an HDB block in Pasir Ris fell from a height of at least eight storeys, startling residents in the area. There were no injuries.

The Pasir Ris-Punggol Town Council and HDB later found the building to be structurally safe, as the panel was part of the facade design and non-structural.