Imposing tighter resale conditions on public flats in prime areas may not deter buyers from cashing in, and may even lead to other problems, said property experts.

They were responding to National Development Minister Lawrence Wong, who said in a Straits Times report last week that the Government is considering measures to mitigate the "lottery effect" of such flats, which tend to reap hefty profits when they hit the resale market.

But these may not work, as flats in the city will still draw demand and high capital gains because of their coveted location, said observers.

R'ST Research director Ong Kah Seng said: "Buyers of flats in prime areas generally emphasise the location and pride of having a flat in central locality, such that they will usually do what it takes to have the chance to own such a flat."

He said: "The owners will still sell the flat after the MOP if they don't intend on staying there. Even if the lease is shorter, the next buyer may also have a short-term mentality."

Mr Mak said the Selective En bloc Redevelopment Scheme (Sers) might defeat the purpose of a shorter lease. Under Sers, old HDB estates are demolished and replacement flats are offered to residents. As a result, even if the lease is shorter, flats will still be in demand if people anticipate that they will receive replacements before the lease is up.

As for raising the resale levy, which ranges from $15,000 for a two-room unit to $50,000 for an executive flat, Mr Ong said this might lead to higher prices if sellers raise their asking price to offset the levy.

OrangeTee research and consultancy manager Wong Xian Yang said that while a longer MOP might stop speculative demand, this might put owners who genuinely need to sell the flat urgently in a difficult position.

Instead, he suggested controlling the original launch prices. "Even if a flat is sold for $1 million, if they buy it at $800,000, the capital appreciation is not that much," he said.

Mr Mak suggested taxing away any "lottery" gains. But implementing it in a fair way might be hard. 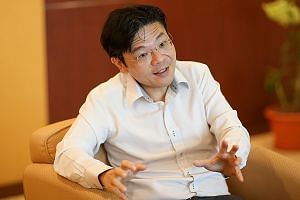 "How do you determine what is a super normal profit? And where do you execute the tax?" he asked, noting that non-city locations such as Bishan and Clementi also command high resale prices.

Chief executive of International Property Advisor Ku Swee Yong feels that public housing subsidised by taxpayers should not be built on expensive, prime land. "We can begin by rezoning all HDB sites in the core central region (CCR) as private residential sites," he said, citing the HDB blocks in Tanjong Pagar Plaza.

He added: "The higher land value for residential sites in the CCR will return more cash into our national reserves when private developers pay for these sites.

"Such a move will also reduce the burden on taxpayers subsidising 'lottery flats' and creating millionaires of subsidised home owners."