SINGAPORE - The touchy issue of what constitutes "common property" at an apartment complex has become clearer following a Court of Appeal judgment released on Monday (March 5).

The three-judge Court has now issued its grounds for that ruling, outlining why Dr Sit had breached various by-laws by carrying out work at the condominium in Tanglin without approvals.

Chief Justice Sundaresh Menon and Judges of Appeal Judith Prakash and Steven Chong made it clear that an area of common property did not have to be physically accessible by any of the unit owners or be used or enjoyed by the occupiers of two or more lots.

"Any area or installation that could affect the appearance of a building in a strata development, or that was part and parcel of the fabric of the building, could, by its mere presence, be 'enjoyed' by some or even all subsidiary proprietors of the development," Chief Justice Menon noted.

Dr Sit, who has a net worth of about US$1.3 billion, according to Forbes magazine, installed timber deckings over the entire roof outside his unit, including the floor trap and drainage system, as well as two ledge areas that ran along a segment of the unit's external facade. He also installed an air-con vent on an adjoining wall.

The condo management council had taken issue with the additions.

Dr Sit, chairman of Hong Kong-listed Brightoil Petroleum Holdings, argued that the penthouse ventilation system was inadequate and that the areas did not constitute common property. 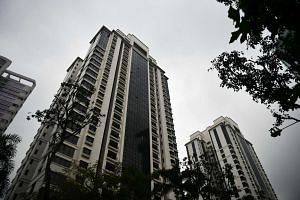 The Strata Titles Board rejected his application to keep the installations in February 2016, ruling that he had breached by-laws and that the work was done on common property.

Dr Sit took his case to the High Court, which dismissed his claim last year. He then filed an appeal. His case was argued by Senior Counsel Alvin Yeo with lawyer Subramanian Pillai representing the condo council.

"The crux of the matter was the proper interpretation of the term 'common property' as defined in section 2(1) of the (Building Maintenance and Strata Management Act)," wrote Chief Justice Menon .

The court found the work was done on common property and breached the Act.

It also rejected Dr Sit's claim that two of the three areas of work were exempt as they qualified as "structures or devices to prevent harm to any children in any place within the development".

The court said the relevant by-law "should not be construed to grant free licence for individual subsidiary proprietors to take matters into their own hands to reconstruct common property anywhere in the development whenever they consider any children, whether or not it be their own or resident in their lots, might suffer some harm or danger unless something were done".

The court also ordered costs of $40,000 to be paid to the condo management council.