Competition stiff at 3 projects launched last week, with 3,095 flats for sale in HDB's first sales exercise of the year

Bigger flats in Sembawang and Toa Payoh proved to be the most popular among home seekers in the Housing Board's (HDB) first sales exercise of the year that concluded yesterday.

As at 5pm yesterday, there were more than 10 applicants vying for each of the 266 five-room and three-generation flats in Canberra Vista, a Build-To-Order (BTO) project in Sembawang located next to Canberra MRT station.

Competition was equally stiff in the mature estate of Toa Payoh, where the 1,211 four-room flats on offer received more than 10,000 applications. This translates to about eight applicants for each available flat.

The four-room flat is the biggest flat type in the two BTO projects - Kim Keat Ripples and Toa Payoh Ridge - in Toa Payoh, one of Singapore's most sought-after housing estates.

The 102 three-room flats in Toa Payoh Ridge, which is located between Caldecott and Braddell MRT stations, drew four applicants per unit.

The last BTO launch in Toa Payoh was the 542-unit Kim Keat Beacon in May 2018, where the four-room flats had four applicants per unit.

Ms Christine Sun, head of research and consultancy at OrangeTee & Tie, said a high application rate for Toa Payoh was to be expected. The high level of interest in the bigger flats in the non-mature estate of Sembawang, she added, was "unusual" but "not surprising". 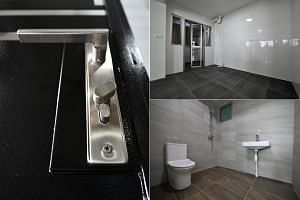 She said: "It's not often we get a new BTO project that is right next to an established MRT line and with upcoming amenities like shopping malls next to it.

"Prices are also more affordable compared with the other two Toa Payoh projects, which are priced higher."

Since last September, eligible buyers have been able to tap the new Enhanced CPF Housing Grant of up to $80,000, which has no restrictions on the choice of flat type and location.

In May, the HDB will offer another 3,700 BTO flats in Choa Chu Kang, Tengah, Pasir Ris and Tampines.

A further 4,100 BTO flats in Woodlands, Ang Mo Kio, Bishan, Geylang and Tampines will be released in August.