SINGAPORE - All four lifts at two Housing Board flats in Punggol broke down for about four hours on Tuesday (Jan 10).

The lifts at Blocks 314A and 314B at Waterway Cascadia broke down at around 5pm on Tuesday, Lianhe Wanbao reported on Friday (Jan 13). According to residents, the disruptions at the new Build-To-Order flats have been happening at least once a month since September last year.

The Straits Times understands that the lifts are maintained by lift company Sigma Elevator.

It has been banned from tendering for new HDB projects since October 2015 due to its inability "to fully adhere to the timeline of lift installation for certain projects", ST reported on Friday.

A spokesman for the Pasir Ris-Punggol Town Council told ST on Friday that the fire protection system at both blocks had been activated falsely, homing the lifts at the ground floor.

"Immediate attention was given to the source of the issue, in this case, the fire protection system after we received the feedback, after which, the lift technician followed up to check on the lifts," said the spokesman. 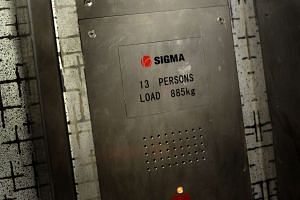 The Town Council is currently investigating the cause of the activation of the fire protection system.

Resident Pan Zhenyu, a 35-year-old market researcher, told Wanbao that a neighbour told him about the breakdown via a WhatsApp group chat.

After hearing that the lifts were down, Mr Pan went for dinner and returned at 7pm but the elevators were still not working.

"We waited until after 8pm before we saw a lift maintenance worker turn up," he claimed. More than 10 residents gathered at the void deck to wait for the lifts to be repaired, he said.

"The block is 18 floors high and I live on the 17th floor," said Mr Pan. "It's really not easy to climb that high, so I could only wait patiently. I got home after 9pm, after the lifts were fixed."

A 56-year-old resident who gave his name as Mr Huang told Wanbao that he waited four hours for the lifts to be fixed.

Mr Huang, who is self-employed, said he had gone home at about 6pm when he was told that the lifts were down.

"I waited outside for four hours and went home only after 10pm. Actually, the lifts have been breaking down at least once a month since September last year. This has been very inconvenient for us, but we're also used to it by now," he said.

Pasir Ris-Punggol GRC MP Sun Xueling visited the affected blocks on Wednesday (Jan 11), according to a post on her Facebook page.

She wrote on Wednesday: "The fire alarm at Block 314B Cascadia had gone off twice (Tuesday) evening bringing lifts at Block 314B to a stop as a safety measure. I have asked for an incident report from the agencies and the lift contractor as to why it took so long to reset the lifts thereafter as it had severely inconvenienced residents and could have had dire consequences if someone had been ill during the incident."