The Ministry of Finance highlighted on Wednesday (March 27) that the amount disbursed from the rebates, which were announced during this year's Budget to help households with expenses, will amount to $132 million this year.

The S&CC rebate has been paid out annually by the Government since 2013. It will be used to directly offset a household's S&CC payment.

In total, each eligible Singaporean household will get between 1½ and 3½ months of rebates, depending on their HDB flat type.

From the end of March, eligible households will receive a letter with more details on the rebates.

Those living in one- and two-room flats can expect one month's rebate in April, July and October this year, and half a month's in January 2020. 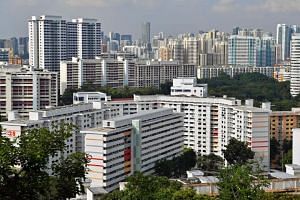 900,000 HDB households to get utilities rebate this month

The MOF said that households who pay their S&CC through Giro will have the necessary arrangements with their banks made by the town councils.

Anyone with inquiries on their household's eligibility for the S&CC rebate can call 1800-866-3078 between 8.30am and 5pm on weekdays, or e-mail sccrebates@mailbox.hdb.gov.sg.