Struggling to communicate with her young son who has autism, housewife Shariza Sahari, 42, was thankful to find help at the Awwa Early Intervention Centre in Fernvale.

She learnt tips and strategies during the sharing sessions between experts and caregivers that allowed her to interact better with her six-year-old son, Aqeel.

She goes to the centre three times a week with the boy before his pre-school sessions at PCF Sparkletots in Punggol West.

Yesterday, President Halimah Yacob visited the centre in Fernvale, where she interacted with the children and their caregivers, and also attended a Kopi Chat session.

Kopi Chat is a regular peer coaching and support session where parents, caregivers and experts share strategies and tips on managing children with developmental needs.

The three Awwa Early Intervention Centres in Fernvale, Kim Keat and Hougang cater to children up to six years old who have moderate to severe disabilities.

Kopi Chat first started in Fernvale in October 2017, with about six to eight caregivers attending each session. The sessions were expanded to the other two centres from February last year. More than 760 participants have since benefited from Kopi Chat. 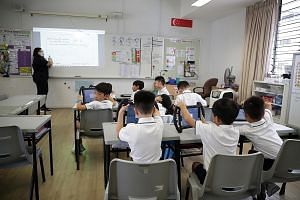 Tech improves lives of kids with autism, helps them learn

Once picked on and misunderstood, lab assistant finds a way

Madam Shariza is married to a logistics executive at Ng Teng Fong General Hospital. The couple have another son aged 10. Madam Shariza has been attending Kopi Chat since the sessions began in Fernvale.

She said Kopi Chat has helped her to communicate better with Aqeel. Two years ago when Aqeel was four, he was unable to verbalise words and could only make sounds. As she could not understand him, it caused a lot of frustrations between them and she thought he had a speech delay issue.

But he was diagnosed that year with autism spectrum disorder, as he also had problems with his fine motor skills and social communication.

During a Kopi Chat session with a speech therapist, Madam Shariza learnt how she could print out pictures of everyday objects as a tool to get Aqeel to communicate with her.