Contrary to expectations, new Housing Board flats in Tampines were not the top draw in this month's Build-to-Order (BTO) launch, which closed at midnight.

Instead, Buangkok Woods in Hougang was the most popular project, with 4.4 applicants for each three-room flat and 4.3 for each four-room flat as of 5pm yesterday.

There were 1.3 to 2.3 applicants for each available unit in Tampines, depending on flat type. This was also generally lower than application rates in the non-mature estates of Yishun and Sembawang.

Mature towns, as classified by the HDB based on when they were developed, are usually the most popular in BTO launches due to their generally more central locations and established amenities.

In May, for example, applications for flats in Ang Mo Kio and Bedok far outstripped those for flats in Bukit Panjang and Sembawang. Experts said the high supply of Tampines flats might explain the lower application rates this time.

There were 2,736 units launched in Tampines and 1,325 units - not including two-room flexi flats - across three non-mature estates.

One first-timer is Mr Fang An Da, 27, who applied for a Tampines four-room flat with his wife. Said Mr Fang, who is self-employed: "It is a little bit expensive but the location is nice, that is why we chose it."

PropNex Realty chief executive officer Ismail Gafoor noted that the absolute number of applicants is highest for Tampines. "Mature estates will continue to be more popular due to the lack of available land for new housing units," he added.

For some buyers, price is a factor.

"I would have liked Tampines, but it is more expensive since we are getting a four-room flat," said technician Abdul Hadi Ali, 28, who applied for a Hougang four-room unit.

Mr Yeo Boon Kwee, 64, is applying for a two-room flexi unit in Hougang as it is more affordable than a larger flat. Such units start at $79,000 before grants. "Hougang is more central than Yishun," he said. 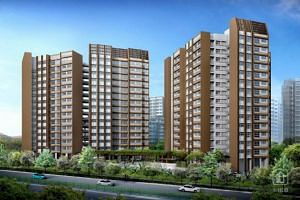 Two-room flexi units remained popular in this month's BTO exercise, with six and 2.5 applicants per unit in Hougang and Yishun respectively. Such units have been in high demand since singles were first allowed to buy them in July 2013.

Buyers prepared to pay more might be waiting for flats in Bidadari, which is more central, said R'ST Research director Ong Kah Seng.

One of them is businessman Peter Quah, 72, who said: "Tampines is so far away." He is waiting for the next BTO in November instead.

Apart from 2,180 flats in Punggol, the November launch will offer homes in three mature estates: 1,660 in Bedok, 1,000 in Bidadari - which is considered part of Toa Payoh - and 250 in Kallang/Whampoa.