A pair of grey rubber slip-on shoes has been one of Mr Murali Pillai's campaign trail secrets.

He demonstrates how he can easily slip on or take off the shoes in seconds each time he enters or leaves a resident's home.

Not having to deal with shoelaces is a time-saver. And this is crucial for the People's Action Party's (PAP) Bukit Batok candidate as spending time with residents means he can "drill down" into the details of his proposals to make the constituency a better place.

His preference for house visits is also why he opted to hold just two rallies during the nine-day campaign period - half that of his rival, Singapore Democratic Party chief Chee Soon Juan.

House visits do not get media attention, but the privacy allows him to chat in depth with residents, he told The Straits Times yesterday.

The head of commercial litigation at Rajah & Tann, Mr Murali, 48, said he learnt how to look beyond the obvious during his time as a police officer from 1992 to 1995. 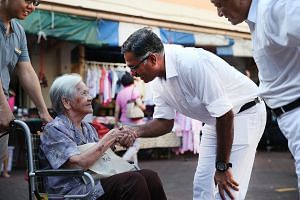 He cited the example of when a film reel for the 1993 martial arts movie, Fong Sai-yuk, was reported lost from the now-demolished President Theatre in Balestier. It looked like a simple theft case. But he pursued it and eventually uncovered an international piracy syndicate.

"This is something I've learnt: drill down. Because without drilling down, you're only going to treat the symptoms. You're not going to deal with the core."

Such an approach during discussions with residents has enabled him to refine details of plans for the area that he had put to them.

Some residents said the health cooperative he wants to set up - for them to buy health consumables at a lower price - should have tiered membership fees to make it more affordable across income levels.

Residents also advised him to be sensitive when approaching families to take part in his youth mentorship scheme, which aims to help children from disadvantaged homes by linking them with mentors.

"Families can be quite sensitive about being approached," he said, as some parents may take it to mean they are doing a bad job. They told him a better way could be to get relatives or neighbours to raise the issue with families.

The campaign draws to a close today and Mr Murali has spent much more time talking about his plans than about Dr Chee's character and whether it made him a suitable MP - an issue first raised by Prime Minister Lee Hsien Loong.

Even Dr Chee noticed. As other PAP leaders weighed in, he asked why Mr Murali stayed silent.

Why did he? Said Mr Murali yesterday: "This election is about getting the buy-in from residents. From my discussions, it's extremely clear they are interested to know which candidate offers a better value for them in relation to the programmes that they bring, their track record, competency, etc. That has been my focus."

As it is a by-election, he also wants to emphasise his ability to handle local issues and garner resources to effect change on the ground.

Mr Murali will find out in two days' time if he will be an MP or join the "club" of PAP colleagues who lost twice at the polls. He lost narrowly at GE2015 in Aljunied GRC.

But he is unfazed, recalling what his late father - unionist and former political detainee P. K. Pillai - said: "He taught me not to be concerned about things you cannot control - just focus on the things you can."

In the last few weeks, he has arguably spent more time with residents than with his wife, teacher N. Gowri. But he makes an effort to take her to school in the mornings and she wakes up when he returns past midnight to catch up on his day.

As Polling Day nears, Mr Murali said he has to mull over the future: "I will have to deal with what I would do, depending on what happens. These are thoughts that probably, during Cooling-off Day, will be a good period to think about."

A version of this article appeared in the print edition of The Straits Times on May 05, 2016, with the headline 'Home visits allow Murali to get close to residents'. Subscribe
Topics:
More
Whatsapp Linkedin FB Messenger Telegram Reddit WeChat Pinterest Print Purchase Article Copy permalink