The Home Team Academy (HTA) has incorporated virtual reality (VR) technology into its training for crime scene investigators, taking advantage of the digital habits of a new generation of personnel.

Since end-2017, 210 senior officers in seven batches have been trained on the immersive platform, which simulates the real world.

The Home Team School of Criminal Investigation of the Singapore Police Force, located at HTA in Old Choa Chu Kang Road, collaborated with the Office of the Chief Science and Technology Officer to develop the technology.

Showcased last Friday, it featured a VR headset linked to a multi-directional treadmill that allowed the user to walk around a virtual crime scene and interact with it. The system detects hand gestures and movements. The hardware cost about $15,000 per set-up, according to an HTA spokesman.

VR training allows for a realistic but safe and controlled learning environment for trainees, who can hone their decision-making skills without fear of making mistakes, said the spokesman.

They can learn about gathering facts from first responders and witnesses, and survey, collect and process evidence at the crime scene. These include placing placards to label pieces of evidence, testing whether items at the crime scene have traces of blood, and taking photos of the scene and evidence for documentation.

The spokesman said this training approach suits the new generation of learners who grew up as "digital kids", with a preference for "self-directed and self-paced learning". 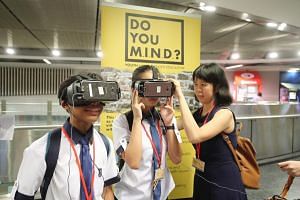 "The project also aims to bring about savings in physical space requirements, procurement of props as well as storage space for props," the spokesman added.

"The use of VR simulation reduces the chore of physical set-up and improves the turnaround time between each practical session."

Senior crime scene specialist Wong Jun Yan, 27, is among those who have benefited from the new technology. Having been in the service for a year, Mr Wong, a civilian officer with the forensics division of the Forensics Management Branch, said using VR simulation helps him incorporate what he learnt from multiple modules in the classroom during the course into one session.

"If they (trainers) want to teach us a module on how to dust for fingerprints, they will go and set up a scene just for that," he said.

"This (VR system) has a lot more elements to it. It feels more realistic in the sense that when you approach it, you will know that you're not attacking just a specific module, but the whole entire scene."

He said the training felt immersive as it also incorporated the other individuals who would be at a crime scene, including first responders and passers-by.

The Home Team's adoption of VR technology is part of moves to prepare its officers with the skills necessary for when they are deployed in the field.

In September 2017, HTA started a trial for a mobile classroom (MobiC), to train front-line officers using VR at any neighbourhood police centre. At the push of a button, MobiC opens up to occupy three carpark spaces, and can train 16 officers in 40 minutes.

The trial is ongoing, with the project team studying feedback and assessing the continued use of this system to augment training for front-line officers, said the HTA spokesman.