SINGAPORE - Civil defence officers forced their way into a Bedok North flat after a neighbour complained of a strong stench, and found an elderly man lying motionless among mounds of rubbish.

Paramedics at the scene pronounced the 68-year-old dead, said the Singapore Civil Defence Force (SCDF) on Monday (Sept 30). Police have classified it as unnatural death.

The SCDF said a hydraulic tool was used to forcibly enter the 12th-storey flat last Saturday.

When The Straits Times visited it on Monday, a chain held shut the metal gate at the entrance. But the main wooden door was lying on piles of things the man had hoarded over the years. These included umbrellas, newspapers, magazines, toys and various things stuffed into plastic bags.

Next-door neighbour Chin Tiong Wah, 50, who has lived there for the last 39 years, told ST that there was a fetid odour on Saturday morning when he left his home and on his return in the evening, it was overwhelming.

Mr Chin, an associate director with a real estate agency, called the police at 9.17pm.

The man, whose name has not been released officially, is among several cases reported in Singapore newspapers over the years of elderly people living alone, and whose deaths at home are not discovered until a few days later.

In January this year, a 77-year-old man was found dead in his Tampines flat, after blood dripped through a neighbour's ceiling below.

In December 2018, a 79-year-old man was found dead in his Beach Road flat after blood was seen seeping out of the flat.

In December 2017, a 68-year-old man was found dead near his bed in his Punggol flat after a social worker who went to visit him noticed a stench.

Two days later, another man, 52, was found in a decomposed state in the living room of his Bedok flat. 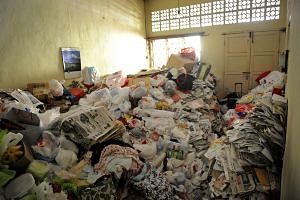 Hoarding in the spotlight

How hoarding crowds out family members

The hoarder's anguish and inability to discard things

In last Saturday's incident, neighbours interviewed said the man lived alone, after his wife and two children, fed up with his hoarding habits, moved out many years ago.

He kept to himself. An elderly woman on the 11th floor said he would walk by her flat regularly, without even nodding in friendly recognition.

She added: "Recently, he had lost a lot of weight and looked quite sick. He had to hold his pants up as he walked."

He would leave the discards he brought home at his door entrance and neighbours would ask the authorities to clear them.

Mr Chin said the last time they were removed was on Sept 11.

"In the past weeks, we noticed the pile stayed untouched and did not grow," said Mr Chin, adding that several neighbours had expressed concern at his absence.

Then a foul smell came from the flat, he added, leading him to call the police.

Mr Chin said that he lodged a case about the man with the nearby family service centre some time in September.

"After receiving notice of the case, we conducted a home visit to assess the situation. However, we were not able to contact the man in the flat as there was no response," said Mr Tan on Tuesday in response to queries from ST.

He added that the centre would do its best to support the man's family members as long as they needed its assistance.