Apple's move to dump long-standing headphone connector in iPhone7 gets some jeering, others cheering

In what it called a move that took "courage", Apple said it was ditching the 140-year-old headphone jack technology in its new iPhone 7 and iPhone 7 Plus handsets.

While many fans in Singapore lamented the loss of the jack and others mocked the iPhone maker's "bravery", technology observers said consumers would eventually come to terms with the change.

The new phones, announced yesterday morning (Singapore time), will be available here for pre-order today and up for sale next Friday.

Yesterday, the three local telcos - Singtel, StarHub and M1 - said they received "strong" and "healthy" interest in the handsets, after they allowed customers to register their interest in the iPhones online.

The same size as last year's iPhones, the new handsets add dust- and water-resistance, and use the faster A10 Fusion processor. The iPhone 7 Plus has dual cameras for optical zoom too. But what drew the most attention was ostensibly the lack of a headphone jack. In its place is Apple's proprietary Lightning port for audio output.

Apple has a history of abandoning old technologies, such as floppy disk drives and even its own mobile gadgets' 30-pin connector, whenever it deems fit.

During a presentation in San Francisco, Apple vice-president of worldwide marketing Phil Schiller pointed to "the courage to move on and do something new that betters all of us" for going jack-less. 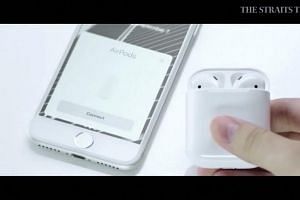 5 minutes with Apple's new iPhone 7 Plus

Even so, Apple was arguably not courageous enough, as it will include with each iPhone 7 or 7 Plus a Lightning-to-3.5mm-headphonejack adapter. The adapter can be bought separately for $14 as well.

Each phone will also come with a pair of earphones that connect through wires to the iPhone's Lightning port. Consumers can opt for wireless headphones too, including those Apple launched yesterday.

Fans here, like bank executive George Gong, 32, thought Apple was arrogant in ditching the jack and are reconsidering buying the iPhone 7. "I frequently use my headphones for music, phone calls and more. Imagine if I forgot to bring the adapter," said Mr Gong.

Still, mobile product manager Derrick Ho, 32, is very tempted to replace his iPhone 6 with the new handset. "I need to muster the courage (to upgrade)," he said.

Analysts said Apple's move has benefits. Ms Karissa Chua, consumer electronics analyst at market research firm Euromonitor International, said the headphone jack was removed so that it is easier to waterproof the gadget and to make way for future hardware innovation.

Others like Ms Julie Ask, vice-president and principal analyst at research firm Forrester, did not think it was a problem linking headphones wirelessly to the new iPhones. "It's an engineering decision that's meant to benefit the consumer."

Mr Clement Teo, principal analyst at market research and consulting firm Ovum, agreed a jack-less iPhone will likely be something people will start to accept and realise as a good thing. "It's like how the touchscreen first became a part of using a mobile device," said Mr Teo.

For senior software engineering manager Tang Weng Sing, 44, the missing jack does not bother him. "In the long term, it may be a good move. (The jack) is a very old technology that doesn't do much, given that it's taking up precious (space in the phone)," he said.

SEE BUSINESS: Nintendo banks on Mario for leap in shares