He was 50 and she 41 when they first went steady. She was drawn to his hard-working and down-to-earth nature, he to her simple heart and willingness to listen.

The nature of their dates also reflected a simple love: meals, movies and jogs along East Coast Beach.

Ms Koh Soh Kuan broached the subject of settling down several times during their eight years together, but Mr Pang Ming Kwong was a career-minded man who was not keen to get married.

"He kept telling me that many marriages ended up in divorces and I was disappointed, but I knew marriage cannot be forced," said Ms Koh, who stuck with him even when he was diagnosed with terminal lung cancer two years ago and doctors said he had only a few years to live.

On Nov 17 last year, however, he held her hand beside his hospital bed and declared: "I love you, will you marry me?"

Ms Koh, 49, said yes even though Mr Pang, 58, was by then very frail from battling cancer.

A month later, on Dec 15, they exchanged engagement rings in front of about 50 guests and staff at Mount Elizabeth Hospital. Their story was widely shared on social media and touched many people.

But on Dec 28 last year, Mr Pang died before they could tie the knot. A date at the Registry of Marriage had already been booked for Jan 21.

In an exclusive interview at a fast-food eatery near her home in Bedok, a tearful Ms Koh opened up to The Sunday Times about the man she loves.

I did not think about the brevity of time left when he proposed. It did not matter, whether it is a day, a week or a month, because we loved each other. Love shouldn't be defined by time or what you get from each other.

They met in 2011 at a tea appreciation class. Participants exchanged contact numbers freely and Ms Koh gave Mr Pang her number when he approached her.

He called the next day, stammering over the phone, and immediately asked her out. She found him sincere and agreed to meet him.

Their first date in 2011 was at a cafe in Pan Pacific Hotel and they talked about work. He was an auditor in an international certification firm and she, an executive in a reinsurance company.

A year later, they confessed their feelings for each other. It was her first relationship while he had one previous girlfriend.

While she was disappointed that he was not keen on marriage, she accepted it and stayed with him.

In 2016, Mr Pang told her that he was found to have stage 4 lung cancer during a health check-up. Both were devastated but tried to continue living life as usual, going out for meals and exercise.

Whenever Mr Pang was hospitalised and had no appetite, she would coax him to eat by asking him what he wished to do in the future. He said he would like to go to concerts and travel overseas with her. 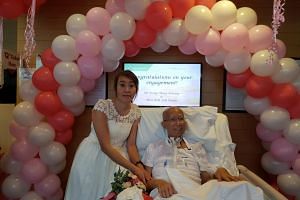 "If you are with me, I think I can live for a few more years," Mr Pang often told Ms Koh.

Ms Koh, a Buddhist, was hoping for a miracle - that he would be saved; Mr Pang, a Christian, would also pray every night.

On Nov 9, when he was hospitalised for the third - and final time, he started calling her "my dear wife" when she visited him every day.

"I was very touched because he often said in the past, he is not like youngsters who know how to sweet-talk, or give flowers and gifts. Hearing him call me that was very valuable to me," said Ms Koh.

From then, the couple began holding hands at his bed every day. She told him interlocking their fingers would symbolise being husband and wife forever and he smiled and nodded his head in happiness.

On Nov 17, he asked her to sit down next to him. He sounded so serious she was worried that he would tell her that his condition worsened.

Instead, he told her she has changed him and he finally knew what love was. Then, he asked her to marry him.

"I was very surprised and happy," said Ms Koh, who added that she had no idea what made him change his mind about marriage.

"I did not think about the brevity of time left when he proposed. It did not matter, whether it is a day, a week or a month, because we loved each other. Love shouldn't be defined by time or what you get from each other," she added.

But her 73-year-old mother, who has mild dementia, urged them to get married only after he got better. Ms Koh did not discuss this much with Mr Pang as she did not want to stress him further. She just reassured her mother that he would get better.

A day after the proposal, Mr Pang was transferred to the intensive care unit for severe breathing difficulties. In total, he had undergone five rounds of chemotherapy and could not speak without the assistance of a speaking valve.

On their engagement day, Ms Koh wore a white dress and he donned a white T-shirt. While the nurses sang A Thousand Years from the Twilight movie, tears streamed down Ms Koh's face.

It meant a lot to her that Mr Pang went to such lengths to recognise her as his fiancee. She realised it could be his way of showing his final gift of love to her.

Even till the very end when the doctor was writing down his time of death, Ms Koh pleaded with him to save her fiance.

On Jan 21, the day she is supposed to register her marriage with him, her friends are planning to have a picnic with her at East Coast Beach, in memory of Mr Pang. He loved the sun and nature.

Ms Koh, who is not open to dating other men from now on, still has one question on her mind.

"Can I still go and register my marriage with him on that day?" she asked desperately, not rhetorically.

"I miss him so much and I want us to be husband and wife forever."

A version of this article appeared in the print edition of The Sunday Times on January 13, 2019, with the headline 'His final gift of love'. Subscribe
Topics:
More
Whatsapp Linkedin FB Messenger Telegram Reddit WeChat Pinterest Print Purchase Article Copy permalink