Importers say shrinking supply and stronger US$ are behind the squeeze; prices estimated to rise by 10-15%

Celebrations may not be all that peachy this coming Chinese New Year - when it comes to mandarin oranges, at least.

The citrus fruit, a must-have during the festival, may cost up to 20 per cent more in the Year of the Rooster, due to decreased supply and a stronger American dollar, said local importers.

Typhoon Megi, which hit Taiwan in September, and a January frost in China have caused a 20 per cent drop in supplies of the fruit, said Mr Kelvin Ong, category manager of fruits at Cold Storage.

He estimated that mandarin orange prices would increase by 10 to 15 per cent in general, though he said the supermarket chain is in discussions with suppliers to keep prices as close to the last Chinese New Year's levels as possible.

Singapore Fruits and Vegetables Importers and Exporters Association vice-chairman Tan Chin Hian said the stronger greenback was another factor that could drive prices up, because transactions for the fruit are done in US dollars.

A spokesman for FairPrice, the largest supermarket chain here, said it was still in talks with suppliers to ensure that its mandarin oranges - which hit the shelves next month - remain affordable.

It gets its mandarin oranges from mainland China, Taiwan, Pakistan, Japan and South Korea.

Mainland China is Singapore's largest source of mandarin oranges by far, accounting for at least three-fifths of imports over the past three years, according to data from the Agri-Food and Veterinary Authority. Cold Storage said the Chinese province of Fujian supplies most of the mandarin oranges sold in Singapore.

Pakistan, Australia and Argentina are other key exporters.

Singapore has imported around 19,000 tonnes of mandarin oranges a year for the past three years. 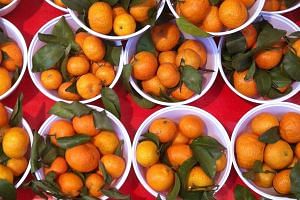 A guide to mandarin oranges: 11 types of citrus for the season

Mandarin oranges come in varieties such as ponkan, lukan and swatow. In early February this year, a carton of 12 ponkan oranges from Taiwan sold for $8.65 at FairPrice.

Importers believe that fewer mandarin oranges may be sold this coming festive season.

A worsening economy and the proximity of Chinese New Year to the Gregorian new year could dampen demand, said Mr Tan.

Families would have to prepare for the new school year and spend money on items like school uniforms, he said. "When Chinese New Year falls at the end of January, demand is always bad because... buying power is not as strong."

But some consumers say they will still buy mandarin oranges even if prices go up. The fruit is associated with prosperity as its name sounds like the word "luck" in Mandarin.

Teacher Low Kit Ping, 50, said that buying mandarin oranges for Chinese New Year is very important to her family and they buy one to two cartons every year.

Each carton of 48 oranges cost $22 this year, she said. She added that an increase in price of not more than $10 would still be acceptable.

Housewife Ng Chen Woon, 48, was not too concerned about the possible price increase either. "We will definitely be buying because it's an expectation that people will want to give oranges," she said. "I will still need them for the older generation's sake."

Correction note: This article was edited for clarity.