More own air-cons and have Internet access, even those living in smaller flats, says govt survey

Singaporeans are enjoying higher standards of living across all levels of income and types of housing, according to a government survey.

For example, more households now own air-conditioners and have access to the Internet, even among those living in one-room and two-room Housing Board flats.

The average rate of air-conditioner ownership across all households was 79.7 per cent, up from 76.1 per cent, while the rate for Internet access was 87.3 per cent, an increase from 78 per cent.

The latest Household Expenditure Survey is based on data collected in 2017 and 2018 for Singaporean and permanent resident households.

It found that home ownership remained high, at 89 per cent. Even for those in the bottom 20 per cent in terms of income, 85 per cent owned their homes, up from 82 per cent five years ago.

Ownership of other household appliances such as televisions, washing machines and mobile phones was near universal - between 96 per cent and 98 per cent - among all income groups.

Other items such as the telephone land line, digital cameras and pay TV seem to have fallen out of favour, regardless of income groups and housing types - a trend the Department of Statistics attributes to the availability of substitutes such as mobile phones and online video streaming platforms. Singaporean households are also spending more on eating out - an average of $810 a month compared with $760 previously.

Eating out as a portion of total monthly food expenditure grew to 68 per cent from 64 per cent. This was mainly due to higher spending at restaurants, cafes and pubs, although hawker centres and foodcourts continued to make up the largest share of expenditure on these services.

Meanwhile, transport expenditure fell to $780 a month from $810 previously, mainly due to a drop in spending on private transport like personal cars. Spending on bus and train fares also fell, while spending on taxis and private hire cars rose. 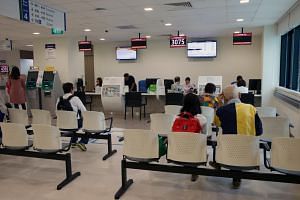 More than 365,000 people will benefit from revised healthcare subsidies like Chas by October

Household incomes rose in 2018, higher for those in 71st to 90th percentile

Singapore Management University sociologist Paulin Straughan said many things have become so necessary as to be considered "basic goods".

"Air-conditioning is not as expensive as it used to be and with climate change, it is arguably also necessary," she said. "Same with the Internet. If you cut someone off from the Internet, you leave them unable to bank easily or get information."

National University of Singapore sociologist Tan Ern Ser agreed, adding: "The luxury goods of yes-teryear have become accessible to a mass market nowadays, and in the process, the general standard of living has correspondingly improved."

Prof Tan said the survey results indicated a "somewhat positive picture" that is "worth celebrating". But he said it would be worth looking at the proportion of households who are barely coping or not coping.

He added: "It would also be useful to find out the extent to which the subjective perception of cost of living may correspond to or deviate from objective measures of 'financial adequacy', and be able to explain the presence or absence of a gap between the two."