Jed Foo is visually handicapped and used to suffer from low self-esteem and weight woes. But he has shed the pounds and turned his life around to accept his disability and to embrace life. This is his story in a series on millennials who have beaten the odds.

For Mr Jed Foo, everything changed when he realised that what he had construed as rejection by strangers was actually shyness from not knowing how to act around him.

Mr Foo, 23, who was born with aniridia, an eye disorder in which both irises are missing, knew it was up to him to bridge the divide.

"Hi," he would say to new people he met at his polytechnic. "I'm Jed - like Jedi, without the 'eye'." It took people a moment but the joking reference to characters in the Star Wars movies always broke the ice.

"Instead of feeling pity, I would tell people about my eyesight as a conversation starter," he said. "I find that talking to people about it dispels any awkwardness they have interacting with me."

That was the beginning of his journey to making peace with himself.

In three years, he lost almost 30kg and won a number of martial arts competitions - feats that he never thought possible to achieve, especially as he has 50 per cent of what would be normal sight.

"If you asked me three or four years ago if I saw myself where I am now, I would tell you it's impossible," he said. "Being able to feel the way I do now is amazing."

But his early years were a struggle. Being visually handicapped, he took a longer time and much more effort to copy notes, read or study.

He had a monocular, an aid to help him see the whiteboard in class, which he hated using as he thought it only drew attention to his disability.

"Growing up, I felt out of place. Why do I have this condition? Why can't I be like everyone else?" he said. "I wasn't really able to talk to people or make friends."

Instead of feeling pity, I would tell people about my eyesight as a conversation starter. I find that talking to people about it dispels any awkwardness they have interacting with me.

MR JED FOO, on how joking about himself always breaks the ice.

He felt lonely in Bukit Panjang Primary School. As he grew older and learnt that his classmates were unsure of how to interact with him, he felt their distance and became even lonelier.

When he moved on to St Joseph's Institution International School, he started eating without restraint, and the pounds piled on.

At his heaviest, he weighed 98kg.

"I didn't feel good about myself. I'm not popular, not good-looking and I had body image issues," he said. "I was wallowing in self-pity."

Hoping to one day help young people who struggled like him, he enrolled in the social work course at Nanyang Polytechnic.

Then came the breakthrough, when he had to step out of his comfort zone and interact with customers while working part-time at a food outlet.

The working stint boosted his confidence and also made him realise it was futile to dwell on his disability.

His father, a sales director, his mother, a housewife, and his older brother, had always been supportive, he said.

And so he was determined to "redefine" himself.

At the top of his to-do list was to lose weight and make more friends.

He started dieting, exercising and lost about 30kg in about three years. Today, he is a trim 70kg.

"I felt I looked better after I lost weight. I felt so much better about myself," he said.

While studying at SIM-University at Buffalo, he picked up muay thai and found that he enjoyed Thai boxing. He decided also to learn Brazilian jiu-jitsu, another martial art.

Mr Foo said that mastering muay thai was harder as it was hard for him to see small movements - like his opponent preparing to execute a kick. Brazilian jiu-jitsu, on the other hand, was a close combat sport and he did not have the same disadvantages there. 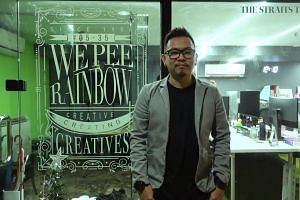 Before long, he was taking part in competitions. In his second tournament, the Singapore Brazilian Jiu-jitsu Open 2018, he won a gold medal. He was elated. He said: "I had never won anything before. I never imagined I could one day compete, much less win."

The medal was all the more precious as he had surgery three months before the competition to remove an abscess from his hip, giving him only a few weeks to train and get into shape afterwards.

Mr Aaron Loh, a past president of the SIM Muay Thai, a student club at the Singapore Institute of Management (SIM), said Mr Foo was determined to excel in muay thai, despite his disability.

Besides being present at every training session, Mr Foo also helped to develop training plans and organised activities to raise the profile of the club.

Mr Loh, 27, a senior wealth-planning manager in a bank, said: "Jed is a humble and friendly guy who possesses grit."

Besides martial arts, Mr Foo also taught himself magic tricks from a magic set his father had given him when he was a teenager. Magic fascinated him and he would spend hours trying to master a trick.

Always glad for a chance to entertain others, he volunteers to perform magic tricks at various events organised by charities.

Last year, Mr Foo graduated from SIM-University at Buffalo with a Bachelor of Arts in psychology and sociology with high distinction.

His sociology lecturer, Dr Kriston D'Amuro, described him as a model student who was always well prepared for class and handed in "high-quality" work on time.

He said: "Jed never asked for special treatment (owing to his disability) and he's always at the top of his class. Other students looked to him for help."

Mr Foo is now freelancing to facilitate training and workshops on leadership and character-building for students.

"I feel that to find the strength to deal with things that have happened, whether big or small, it's best to have a positive outlook.

"Although it is very difficult, the best thing is to be able to have a laugh about it," he said. "Just focus on what you can do now and how you can make a difference."

A version of this article appeared in the print edition of The Straits Times on March 13, 2019, with the headline 'Hi, I'm Jed - like Jedi, without the 'eye''. Subscribe
Topics:
More
Whatsapp Linkedin FB Messenger Telegram Reddit WeChat Pinterest Print Purchase Article Copy permalink