Over this month and next, 500 elderly people in Singapore will be writing stories - without knowing how they end.

Each of them will be given a blank book and asked to fill its first five pages with a story, with volunteers to guide them or help them write.

The book will then be passed to a child, aged between seven and 15, to fill the remaining five pages.

But the co-authors will only get to meet at an event in March, when they can share their side of the story in detail with each other.

The 500 writing pairs will then get to write something together - the title of the story they co-authored. 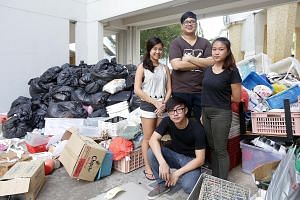 Causes Week 2016: Youth on a mission to declutter homes 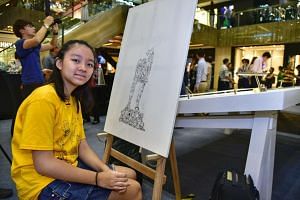 This inter-generational book project, called Live A Legacy, is led by Air Amber, an organisation that involves children and youth in community projects.

It is funded by St Luke's ElderCare, and about 400 of its beneficiaries will be involved.

Distribution of books to the elderly started last week. The writing will be done by the end of next month, and the books passed to the children in February.

Air Amber co-founder and chief executive Suraj Upadhiah, 28, told The Straits Times: "The elderly and youth will co-write stories centred on love - be it love for family, our fellow man, our work or our interests."

The co-authors are encouraged to write stories based on their life experiences, but they are free to add in fictional elements, since the children have to be creative to think of how to continue writing the stories.

Mr Upadhiah said: "We thought of encouraging interaction between the two generations such that it is not just elderly people giving advice to the youth, or just youth helping the elderly with something, but with both groups having equal stake in writing the stories."

St Luke's ElderCare corporate communications manager Jasmine Tham, 35, said: "It is a good opportunity for the youth and elderly to interact and share their experiences with one another."

The book project is the first of a series of inter-generational projects that Air Amber plans to have over the next two years.

"The entire initiative is called The Loving Population. It is an effort to change the narrative of the ageing population," said Mr Upadhiah, who was inspired after seeing and hearing about elderly people's love for their grandchildren and spouses.

"Instead of seeing the elderly as a problem, we want to change perspectives through such projects that will promote understanding and the building of relationships between youth and the elderly."

This is also why Air Amber plans to compile the books into volumes, organised by themes, and make them available in public libraries.

"We don't want it to just be a time of bonding among the pairs and let it end there. We hope the stories will be shared and the general public will think about how they can better love one another," he said.

Madam Lam Suet Yin, 75, filled the first page of her book last week with a drawing of Chinatown in the 1960s, where she used to shop with her close friend.

Madam Lam intends to fill the next four pages with drawings of scenes from movies, which mark the times she spent with her family.

She said in Mandarin: "I want to write about my close friend and family, because family and friends are important, and I hope the youth who gets this book will know that."

One of the participants, Dayna Shanaia Maha, is looking forward to completing an elderly person's story in February.

The seven-year-old said: "I am excited about it. I will see what the elderly person writes first, but I will finish the story with a happy ending."

A version of this article appeared in the print edition of The Straits Times on December 09, 2016, with the headline 'Helping write a story for the ages'. Subscribe
Topics:
More
Whatsapp Linkedin FB Messenger Telegram Reddit WeChat Pinterest Print Purchase Article Copy permalink