Instead of being allowed to claim up to $3,000 a month for all such treatments and related services, claim limits for these drugs will range from between $200 and $9,600 a month.

An additional limit of $1,200 per month will be put in place to cover other cancer-related costs, such as scans, blood tests and doctors' consultations.

The Health Ministry (MOH) will draw up a fixed list of clinically proven, cost-effective drugs that qualify for the insurance claims.

The aim, MOH said, is to moderate increases in healthcare costs - which are driven partly by expensive cancer drugs - and enable Singaporeans to spend less on out-of-pocket cancer treatments.

But why is Singapore spending so much on cancer treatment in the first place?

The number of people making MediShield Life claims for outpatient cancer drugs increased by 30 per cent between 2017 and last year.

MediShield Life also paid out $168 million in claims for these drugs last year - a 50 per cent increase from what was spent in 2017.

This is also more than double the increase in overall MediShield Life payouts over the same time period.

Figures from the Singapore Cancer Registry show that 71,748 people were diagnosed with cancer between 2013 and 2017, compared with 57,303 people in the preceding five-year period.

Cancer is also the leading cause of death in Singapore, with three in 10 people expected to die of the disease.

Traditional cancer drugs typically cost several hundred dollars a month, but newer treatments such as immunotherapy - which activates the body's immune system to fight the disease - can cost more than $5,000.

In 2019, Singapore spent $375 million on cancer drugs, which accounted for a quarter of the nation's total drug spending. Medical advancements mean that these costs are likely to continue to rise.

The country's spending on cancer drugs has grown at a compound annual growth rate of 20 per cent between 2017 and last year. This is more than three times the 6 per cent growth rate for non-cancer drugs.

If the current trajectory continues, Singapore is projected to spend $2.7 billion on cancer drugs in 2030. This is more than seven times what was spent in 2019.

Cancer drugs cost more for Singapore than some other countries

Singapore pays more for cancer drugs than some other countries like South Korea and Australia.

MOH has attributed this cost difference to the $3,000 claim limit that is applied to all types of cancer drugs, which gives pharmaceutical companies little or no reason to lower their prices.

This is because companies are typically reluctant to offer better prices if they know that the national insurance programme will cover treatment for Singaporeans.

With the revised claim limits, Singapore will be able to better negotiate with companies and secure lower prices by determining what it deems cost-effective. The Agency for Care Effectiveness (ACE) - set up in 2015 to help identify treatments with "good outcomes at affordable costs" - has already started discussions with several firms. It has achieved a 30 per cent reduction on average.

Dr Tan Yew Oo, who chairs the cancer drug committee appointed by the MediShield Life Council, puts it this way: "The current MediShield Life claim limit... is quite blunt and does not incentivise drug manufacturers to offer better prices or encourage the use of clinically proven and cost-effective treatments." 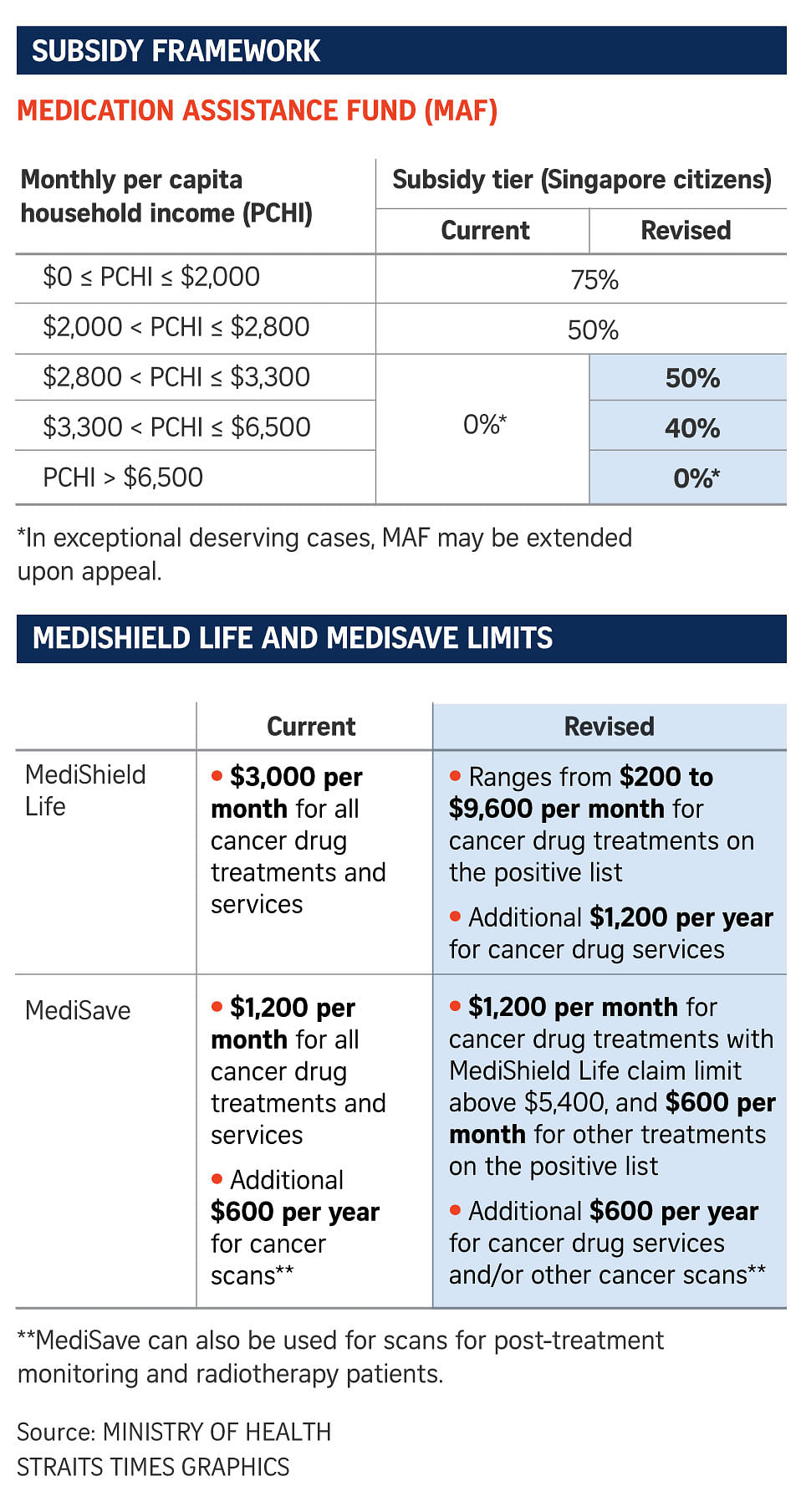 Making sense of the changes

The changes to MediShield Life claim limits will mean that Singapore's approach is more similar to what is being done in countries such as Britain and Australia.

There, national funding is provided only for drugs that meet certain standards and have undergone negotiations with pharmaceutical companies to bring prices down to cost-effective levels.

In Singapore, the ACE will evaluate drugs and carry out such negotiations. Its proposals will be reviewed by MOH's Drug Advisory Committee, which comprises senior public sector doctors, pharmacists and ministry representatives.

This committee will make recommendations to MOH, which will publish the list of approved drugs on its website. The list will be updated every four months.

Treatments that are not on this list will not be covered by MediShield Life, although doctors can request for their inclusion if there is sufficient clinical evidence to support their use.

55 cancer drugs to be added to list of subsidised drugs

MediShield Life and the cost of cancer treatment

Correction note: An earlier version of this article stated that MediShield Life currently allows patients to claim up to $3,000 a year for outpatient cancer drug treatments and related services. This is incorrect. It should be up to $3,000 a month. We are sorry for the error.