A Zika cluster has re-emerged in Singapore after two years. What are the risks involved, and what should people look out for? Felicia Choo answers some questions.

Q What is the Zika virus?

A It is a virus infection transmitted by the bite of an infected Aedes mosquito, which also carries the dengue and chikungunya viruses.

It is generally a mild disease; four in five people who become infected with Zika do not show any symptoms, but could be infectious.

Q What are the symptoms?

A They include fever, itchy rash, body aches, headaches, red eyes and, occasionally, nausea and vomiting. These usually develop within three to 12 days after the mosquito bite and often last between four and seven days.

Q How is Zika spread?

A The virus is spread mainly through the bite of an infected Aedes mosquito.

Transmission between humans is also possible - a pregnant woman can pass Zika to her foetus during pregnancy or around the time of birth. The virus can also be spread through sex. Q Who is at the greatest risk?

A Unborn babies are most at risk should their mothers get infected.

Between 1 per cent and 10 per cent of women infected during pregnancy give birth to babies with defects. The most common defect is microcephaly, where the baby is born with a much smaller head, sloping forehead and damaged brain.

Q Is there a cure?

A At the moment, there is no cure or vaccine. Only the symptoms can be treated.

To avoid getting infected, use insect repellent and wear clothing that covers the body, arms and legs.

The public are also encouraged to do the five-step mozzie wipeout to prevent mosquitoes from breeding at home.

Q Can I get Zika and dengue simultaneously? Does having one of the two ailments make me immune to the other?

A Getting both Zika and dengue from a single bite is theoretically possible, but highly unlikely.

There is also a theoretical risk of getting infected with both viruses, but such a situation is highly uncommon. 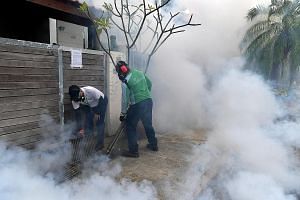 Entomological studies have shown that while both viruses can co-exist in a mosquito, the chance of that happening is very rare.

Getting either Zika or dengue has not been shown to induce cross immunity.

Q Why has Zika resurfaced in Singapore after two years of absence?

A Singaporeans travel extensively and the Republic receives many global travellers - conditions that make it is easy to import the virus.

The same weather conditions and vector driving the current dengue epidemic can also cause a similar surge in cases of Zika.

Q Can my pet get Zika or dengue?

A The only known animals that can get sick from Zika are non-human primates, such as apes and monkeys. Those animals may have mild illness with fever when infected.

There have not been any reports of pets or other types of animals becoming sick with Zika.

Current studies suggest that other animals do not contribute to the spread of Zika, and there is no evidence that Zika spreads to people from direct contact with animals.

A version of this article appeared in the print edition of The Straits Times on September 20, 2019, with the headline 'What you need to know about Zika'. Subscribe
Topics:
More
Whatsapp Linkedin FB Messenger Telegram Reddit WeChat Pinterest Print Purchase Article Copy permalink