Over 6,200 infected so far this year; surveillance shows Aedes mosquito population on the rise

The surge in dengue fever continues, with 500 people diagnosed last week - the highest weekly number in more than three years.

It brought the number of people infected this year to more than 6,200, which exceeds the combined total of the past two years.

With slightly more than one in three people diagnosed with dengue ending up in hospital for three to four days, it means that an average of 24 people may have been admitted to hospital every day last week with the mosquito-borne disease.

Already, 44 people have had the more severe dengue haemorrhagic fever, and five people have died.

The National Environment Agency (NEA) said mosquito surveillance has shown that the population of the Aedes mosquito - the chief agent in the spread of dengue - went up by 56 per cent in May, compared with March.

It said on its website: "This persistently high Aedes aegypti mosquito population increases the risk of transmission of the dengue virus, and urgent action is needed to eliminate potential mosquito-breeding habitats in the community."

The warmer months of June to October are a traditional peak for dengue as the warm weather shortens the breeding cycle of mosquitoes. 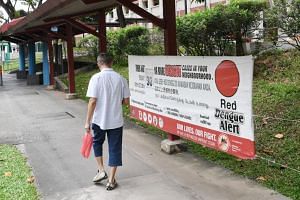 There are currently 125 active dengue clusters, with the bulk in the eastern part of the country.

However, the two biggest clusters, with 212 and 162 infections, respectively, are around Woodlands Avenue 6. These clusters have been active since April. In the past fortnight, 15 more people living in these clusters were infected.

But the apartment block with the highest number of residents affected is Block 55 Chai Chee Drive, where 54 people have come down with dengue this year.

It is part of the fourth-largest cluster with 115 people infected.

People with dengue usually have a sudden onset of fever that lasts up to seven days, coupled with severe headache, joint and muscle pain, nausea and vomiting, and skin rash.

In more severe cases, there is haemorrhaging, with bleeding in the gums and nose as well as under the skin, or with blood in the urine and stool.

The NEA has issued at least 16 stop-work orders to construction sites this year for breeding mos-quitoes. It said: "Construction sites are of particular concern as they can easily become the foci of dengue transmission."

But the bulk of mosquito breeding continues to be in homes.