SINGAPORE - General practitioners make up one of the largest groups that will be affected by the Health Ministry's plans to get all healthcare providers on board the National Electronic Health Record (NEHR) system.

They run more than 1,600 clinics here, including solo practices and chains, and are often the first point of contact for many patients.

But some GPs worry the new rules could mean losing the personal touch with patients.

"My patients don't like it when during a consultation, I face the computer to look at their medical records and key in data," said Dr Auw Tiang Meng, who runs T M Auw Clinic in Hougang. He has access to NEHR, but does not use it.

"My patients are my regulars, so I know their background," he said.

Dr Yik Keng Yeong, who runs Tan and Yik Clinic and Surgery in Bishan, said: "I realise there are lots of advantages, because medical care is so fragmented and everybody needs to be kept in the loop. But it's not that difficult to get information from the patient. We would really prefer not to be dealing with the computer when we are dealing with the patient."

Doctors said that having to enter such data might lengthen waiting times at their clinics and shorten consultation times with patients. 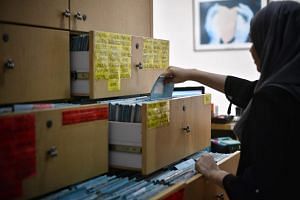 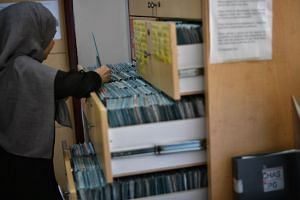 It surveyed 1,500 private healthcare providers recently to learn more about how they collect their patients' data.

There are more than 4,000 such private operators in Singapore, including not just GPs but also hospitals, nursing homes, dentists and hospices.

The National Electronic Health Record has been used by public healthcare institutions since it was set up in 2011. Only a handful of private institutions are on board, with fewer than 3 per cent contributing patient data.

Doctors who use it say it can be a useful tool, especially when it comes to emergency situations.

"It's important to know what medication they are currently taking, which will affect the way we treat the patient," said Dr Lim Jia Hao, a consultant in the Singapore General Hospital's emergency medicine department.

He added: "If the patient has been getting medication from a private GP or hospital, they are essentially a blank slate to us."

One GP who has made the switch to virtual patient records is Dr Low Kee Hwa, who runs Low Medical Clinic. "After 20 years in practice, I was running out of space to store patient record cards," he said. He added that his clinic assistants were spending a lot of time retrieving and filing cards every day.

Dr Low said: "It took us about three months before we were fully competent with all aspects of the new system... we were rather slow at the beginning and that was rather frustrating for the patients."

He added: "I usually key in data during consultation and spend some time after typing to discuss and communicate with the patient."