SINGAPORE - Up to eight patients could have been treated with equipment that had not been fully sterilised at Tan Tock Seng Hospital's (TTSH) Dental Clinic between Nov 28 and Dec 5.

Since it does not know who these patients were, the hospital said on Monday (Dec 10) it is contacting all 575 dental patients who were treated during that period to reassure them that their risk of infection is extremely low.

As a precautionary measure, all elective procedures at the Dental Clinic have been suspended since Dec 8 to allow a safety time-out.

Meanwhile, the hospital and the National Healthcare Group are conducting thorough reviews of procedures and processes, which had already been tightened following a similar case at the National Dental Centre Singapore (NDCS) in June last year.

Health Minister Gan Kim Yong expressed his disappointment that this could happen even after learning points were shared across the healthcare system following the NCDS case. On that occasion 72 instrument packs were not completely sterilised. 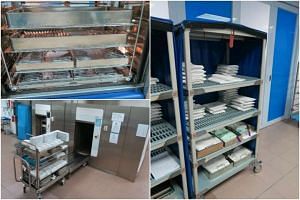 National Dental Centre Singapore needs to clean up its act

He said: "We take a serious view of the incident at TTSH Dental Clinic and I am disappointed it has happened despite our efforts.

"MOH will study the incident closely, consult relevant technical experts, and consider further actions to be taken to reduce the risks of a re-occurrence across the healthcare sector.

"This incident is a timely reminder to all healthcare institutions to maintain a high level of vigilance in delivering patient care safely at all times."

The MOH has directed TTSH to conduct thorough reviews of the incident and to report the findings and follow-up action.

Checks on Dec 5 revealed that eight packs of instruments that were processed on Nov 28 had not completed the last step of the sterilisation process, but had still been used to treat patients at the clinic.

Associate Professor Thomas Lew, Chairman of the hospital's Medical Board said: "We sincerely apologise to our patients and their families for the lapse and distress caused."

He said additional measures are in place to "bolster and improve our vigilance and workflows" to ensure patient safety.

No patients were infected in the NCDS incident, but four NCDS staff were disciplined and tighter procedures put in place across the public healthcare system.

"This incident shows however that further improvements are necessary," admitted TTSH.

The fear is that non-sterile tools could transmit infectious diseases from the previous patient the equipment was used on. Dental treatments usually result in some bleeding, which could allow the contamination on the equipment to enter the bloodstream.

The MOH said it has instructed public healthcare institutions to remind all staff on the importance of checking that instruments used in patient care are properly sterilised, before allowing the instruments to be used.