The mishandling of food is one of the leading causes of food-borne illnesses, or food poisoning. Joyce Teo reports

We all want our food to be safe. But we may be mishandling food - which can lead to food poisoning - without realising it.

Food safety starts from the time you buy your food, by making sure you do not select expired food or buy from vendors who handle food and money with the same hand, for instance.

When you reach home, it is about storing the food properly, followed by preparing and cooking it well.

"Everyone eats and handles food at some point or another - producers, manufacturers, distributors, food handlers and consumers," said Dr Paul Chiew, group director of the laboratories group at the Agri-food & Veterinary Authority of Singapore (AVA).

"The assurance of food safety is a shared responsibility that requires the combined efforts of the government, food industry and consumers." 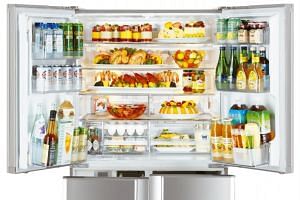 Mishandling of food, especially during preparation, is one of the leading causes of food-borne illnesses, commonly known as food poisoning, he said.

Food poisoning often occurs when harmful bacteria on a food item is spread to another food item through cross-contamination, he said.

If you do an online search, you will discover that the United States and British government bodies advise consumers to wash fruit and vegetables, but not meat and eggs.

Indeed, raw meat and seafood may contain bacteria, such as salmonella and campylobacter, which can cause food-borne illnesses if they are not handled properly, said Dr Chiew.

But the crux of the issue lies in how carefully you wash raw meat, rather than if you can or cannot wash it, said Mr Rishi Ram, senior chef instructor at At-Sunrice GlobalChef Academy.

Whether raw meat needs to be washed depends on where you bought it from, he said.

If the meat came properly sealed and from a processing plant, it would have already been washed and you do not need to wash it again, said Mr Ram.

"However, if the meat came from a wet market or has been re-packed at a supermarket into shrink wrap and styrofoam packaging, you should wash it as it may have come into contact with contaminated chopping boards and packaging materials," he said.

"The next issue is that you should wash the meat, especially poultry, very carefully such that the water used to wash the meat is not splashed onto surrounding utensils, kitchen countertops and even onto your own clothes," he said. "If you are not careful, the splashing of these droplets can spread the bacteria."

This age-old rule states that if you pick up a piece of food from the floor within three seconds of it dropping and give it a quick blow, it will be safe to eat.

Sometimes, you will hear someone call it the two-second or five-second rule, which mean the same thing within those time limits.

These rules are myths.

"Even if the contact time is shorter than three seconds, the surface of the food item would have been contaminated, for example, by microbes," said Dr Chiew.

3. CLEANING THE KITCHEN WITH BLEACH

Although some industry professionals occasionally use bleach to do a thorough cleaning of their commercial kitchens, it requires specialised knowledge and skills to do it properly.

It is not recommended for home users.

The easiest way to clean the fridge and kitchen surfaces is to wipe them with a mild dishwashing detergent solution and a non-abrasive sponge, before wiping away the residue with a dry cloth, said Mr Ram.

You can also use vinegar and other sanitising solutions that are readily available off the shelves.

"Bleach is not recommended as it is toxic and may discolour the kitchen surfaces," said Mr Ram.

Freezers generally do not require as much cleaning.

But if you happen to spill something inside one, you need to defrost the freezer first before cleaning it the same way - using a mild detergent solution and sponge, said Mr Ram.

4. PUTTING RAW AND COOKED FOOD TOGETHER

This includes keeping raw food in separate bags, away from cooked and ready-to-eat food, while shopping.

When storing food at home, place the raw food in tightly wrapped plastic bags or covered containers in the refrigerator to prevent raw food juices from dripping onto other food, said the AVA.

If possible, use separate cutting boards for raw and cooked food.

If not, just wash your knives and cutting boards in between uses, said Dr Chiew.

5. LEAVING FOOD TO THAW IN THE SINK

Some people may think nothing of leaving frozen food in the sink to thaw while they run out to complete some errands. But this is not advisable as bacteria can multiply rapidly at room temperature.

The AVA said it is safer to thaw food by defrosting it overnight in the refrigerator, or by using the microwave oven.

You can also thaw frozen food in a basin or a bowl of cold water by putting the food in a plastic bag first, before submerging it in the water, said the US Department of Agriculture.

But be sure to change the water every 30 minutes, it said.

The same principle applies for marinated food. Do not leave raw meat to marinate at room temperature. Keep the marinated food in a covered bowl in the refrigerator, said the AVA.

This is the last of a two-part series on food safety.