Happy to know that his visitor understood Hokkien, he started to speak in the Chinese dialect. Mr Lee politely invited the guest to "zay" (sit). Then he asked to "hua chiu" (shake hand).

Warmed up, the guest dispensed with ceremony and reached out for the small piece of lean pork sitting tantalisingly on Mr Lee's palm. "Kio wa Uncle seng (call me Uncle first)," Mr Lee teased. The guest was disobedient for a change but received the treat nonetheless, having brought amusement to Mr Lee, 59, a terminal colon cancer patient.

Button is no ordinary visitor but a grey and white miniature schnauzer on a mission to bring cheer and comfort to the dying. The seven-year-old has been been trained by its "paw-rent" Fiona Foo, 48, to obey commands in Hokkien so as to better connect with elderly patients at Assisi Hospice.

On Tuesday, Button was at the hospice to fulfil its usual pet therapy duties, but with a slight difference. With Ms Foo's help, it clasped two mini oranges in its paws and gave them to the patients to wish them a happy Chinese New Year.

"I speak some Hokkien to my children at home so having a dog respond to me when I speak it, there's a connection there and it's comforting," said Mr Lee.

Ms Foo said she started training Button in Hokkien only about 1½ years ago. The scruffy pooch was abandoned and found wandering around a Housing Board estate before it was given to Ms Foo, founder of animal welfare group Hope Dog Rescue.

"It had a calm temperament suited to be a therapy dog and so I trained it in Hokkien because many old people understand that dialect and would enjoy interacting with it using Hokkien," said Ms Foo, whose own dialect group is Hakka.

So Button went through basic obedience training and assessments to become a certified pet therapy dog, with the instructions and commands given entirely in Hokkien. 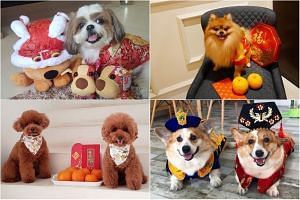 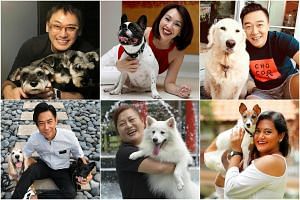 Today, the canine has a decent vocabulary in the dialect that would put teenagers to shame. Besides one-word commands, he also recognises phrases like "jiak yok chwee" (eat medicine), "tiam bak chiu" (put eye drops ) and "jip pang geng" (enter the room).

As being around seniors means there may be noise at times from walking sticks or umbrellas being dropped, Ms Foo trained Button to get used to it by dropping those items repeatedly around it.

Button has come a long way from being a fearful stray. Nowadays, Button, which goes around with a black and pink vest that reads Therapy Dog, seems to enjoy being around both young and old. It has no problem sitting still for long periods whenever it is next to an elderly person or child.

The furry emissary of cheer visits patients in Assisi Hospice two to three times a month.

"When patients find out that it knows Hokkien, they stop and listen, and then burst out laughing. It's an ice breaker and people open up after that," said Ms Foo.

Said Mr Lee: "Button senses your emotions and reciprocates them."

That "empathetic" ability of dogs to sense and respond to emotions is put to good use even when Button visits patients who do not speak Hokkien.

Ms Myra Catherine, 86, did not feel like talking the day Button visited. Even if she did, the Eurasian speaks only English and Teochew.

Button curled up in bed next to Ms Myra, who has colon cancer, and she rhythmically patted it. In a few minutes, both started to relax.

Ms Foo said there was one patient, Madam Rosie Rufus, whom Button was particularly close to. When she died in December last year at age 90, Ms Foo took Button to her wake to say goodbye. At the coffin, Button refused to look in, seemingly upset.

The patient's daughter, Mrs Anne O'Hara, 58, said: "My mum didn't understand Hokkien yet both of them loved each other. I am sure Button brought many of the elderly patients comfort, whether they speak Hokkien or not."