SINGAPORE - A recent survey appears to confirm what many have suspected for a long time: Singaporeans are not getting enough sleep.

On Tuesday (Dec 11), international market research agency YouGov released the results of a survey which found that 44 per cent of Singaporeans are getting less than seven hours of sleep a night.

Numerous sources, including the United States Centres for Disease Control and Prevention, state that those above the age of 18 should get at least seven hours of sleep per night.

However, only 48 per cent of the 1,022 Singaporeans surveyed reported getting seven to eight hours of sleep each night.

The survey, which was conducted in November this year using YouGov's Omnibus survey tool, drew its responses from a pool of Singaporeans which reflected the nation's demographic make-up. 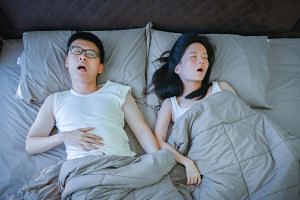 Make sure you get proper shut-eye

A majority of survey respondents also reported that they were unable to sleep through the night, with 77 per cent stating that they woke up at least once a night.

The 23 per cent who were able to sleep through the night without waking up were more likely than the population as a whole to describe their quality of sleep as good.

Singaporeans aged 55 and over also appeared to be sleeping better, with 45 per cent of this group describing their quality of sleep as good.

Mr Jake Gammon, head of YouGov's Omnibus department in APAC noted that "demanding work" could be the cause of sleepless nights.

He said: "In a fast-paced metropolis like Singapore, only about half its citizens are getting enough rest. What's particularly worrying is lower-income Singaporeans are twice as likely to get less than four hours of sleep a night."

On a lighter note, the survey found that 53 per cent of Singaporeans above the age of 18 sleep with a "comfort object", which is either a stuffed toy or security blanket. Women are more likely to do so than men, with 61 per cent of the former and 44 per cent of the latter saying that they did.

Singaporeans aged 25 to 34 were also more likely than those aged 55 and above to sleep with "comfort objects", with 61 per cent of the former group and 32 per cent of the latter reporting that they did so.

However, there was no indication that those who slept with a "comfort object" got better or more sleep than those who did not.