The study by market research firm Nielsen involved face-to-face interviews with about 800 mothers in Singapore between August and September last year.

Mothers here breastfed for an average of 8.1 months last year, up from 6.8 months in a similar 2016 study.

Breastfeeding Mothers' Support Group president Elaine Chow said more mothers here could be breastfeeding because of a greater awareness of its benefits and the knowledge that breast milk is superior to formula milk.

She said her group has seen increased interest in its workshops and free counselling services in the last two years. "Mothers who get support at two critical junctures - after discharge from hospital and when returning to work - are more likely to sustain breastfeeding."

Madam Atiqah Halim, a mother of three, received tips from a group of mothers at the office who taught her how to cope with breastfeeding and the demands of work. 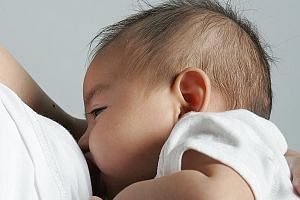 She gives the milk of human kindness to those in need

The 37-year-old human resource manager breastfed her first two children, now seven and four, for 16 months each. She plans to do the same with her third child, who just turned one. "The challenge for working mums is finding the time to pump milk at work," she said, adding her milk supply would fall if she stops expressing milk regularly.

Initiatives at hospitals may have also played a role in encouraging mothers to breastfeed.

Dr Yvonne Ng Peng Mei, a senior consultant at the National University Hospital's department of neonatology, said the Singaporean public today is "very aware" of the advantages of breastfeeding.

The hospital's newborn unit gives formula milk to mothers who cannot produce enough milk of their own, but also follows up with them soon after discharge to give breastfeeding guidance, Dr Ng said.

Associate Professor Yong Tze Tein, head of Singapore General Hospital's department of obstetrics and gynaecology, said establishing breastfeeding can be challenging for mothers who have had pregnancy complications.

She said: "We actively educate them about breastfeeding when they are admitted as they will most likely deliver prematurely and need to be separated from their babies."

Both hospitals also work with the Association for Breastfeeding Advocacy to train nurses in polyclinics to support breastfeeding mothers.