Tumour growth can be slowed or stopped by starving cancer cells of a nutrient commonly found in meat, fish and dairy products, a local study has found.

Researchers from the Agency for Science, Technology and Research (A*Star) and the National Cancer Centre Singapore (NCCS) discovered that cancer stem cells use methionine - an amino acid - as fuel and are especially dependent on it.

Cancer stem cells are responsible for tumour growth and repair, yet the bulk of a tumour is made up of non-stem cancer cells, said Dr Daniel Tan, 41, a senior consultant at the division of medical oncology at the NCCS and a member of the research team.

He said the team found that starving lung cancer cells of methionine for 48 hours resulted in a "dramatic" 94 per cent reduction in tumour size compared to a control sample.

Starving the cells of other amino acids like glutamine, glycine and serine, used by non-stem cancer cells, led to only mild effects on reducing the tumour size.

He added that conventional treatments like chemotherapy are effective in targeting only non-stem cancer cells.

As a result, cancer stem cells regenerate other types of cells and the cancer becomes resistant to the chemotherapy drug over time. 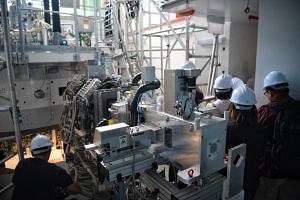 Centre to offer proton beam therapy for cancer by early 2020

"We hope that this approach of targeting the nutrient dependency of cancer stem cells can offer another way of treating lung cancer and other solid tumours," Dr Tan said, adding that the study found a similar dependency in breast cancer, ovarian cancer and leukaemia.

However, methionine is an essential amino acid that is also used by healthy tissues, so it is not feasible to remove it completely from one's diet, said Dr Tam Wai Leong, 41, group leader for precision oncology at the Genome Institute of Singapore under A*Star.

Dr Tam, who is also the study's senior author, said: "What we can do is to prevent the cells from using methionine by inhibiting an enzyme called MAT2A, which converts the methionine into a compound that is involved in critical gene functions in cancer stem cells."

A drug that inhibits MAT2A is not currently available on the market, but the team is working to develop one for clinical trials, said Dr Tam.

It will be important for clinicians to select patients who are most likely to benefit from such a drug, Dr Tam said, as it may not be effective in tumours that express low or no levels of MAT2A.

The study was funded by A*Star and the National Medical Research Council.