SINGAPORE - A physical exercise programme which has helped frail senior citizens improve their mental well-being, memory, functional ability and strength is to be expanded across Singapore.

The Healthy Ageing Promotion Programme For You (Happy) will be extended from 37 sites - including at senior activity centres and void decks - to 130 over the next three years.

Researchers studied 115 people aged 60 and over who were frail or had underlying memory issues and found that after taking part in the programme, more than half had become less frail while 70 per cent had improved walking speed, balance and standing up from a chair.

Nearly three-quarters of them (74 per cent) also had better memory scores, and 40 per cent had become less depressed.

The number of falls was also reduced by 40 per cent.

These results were released on Tuesday (July 9) by the National University Health System (NUHS).

The programme, run by National University Hospital, has been adapted from a programme designed by the National Centre for Geriatrics and Gerontology in Nagoya, Japan. 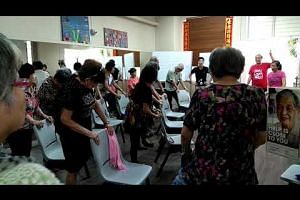 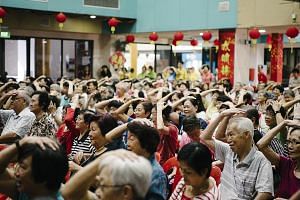 For example, one involves marching on the spot while counting backwards from 30 and clapping on every third number.

The programme also seeks to get seniors to take charge of their health, such as by teaching them to take their own blood pressure and pulse.

"Frailty and memory decline, in particular, are two aspects of ageing that are reversible. Our data from Happy show that older adults who participate in the multi-domain programme and are physically and mentally engaged have better outcomes in both of these areas," said Associate Professor Reshma Merchant, who leads the programme. She also heads the Division of Geriatric Medicine at the National University Hospital.

One in 16 Singaporeans aged over 60 is frail and one in 10 has dementia.

Among over-85s, one in four is frail and has dementia.

Happy also encourages seniors to volunteer as trainers leading the exercises and share health and nutritional tips with fellow seniors.

Since the programme started in August 2017, it has had more than 700 participants, and over 270 volunteers have attended the training sessions, of whom over 130 have been certified to lead the exercises by the programme therapist.

NUHS is partnering the Agency for Integrated Care in extending it to more places across the island.

For more information about the programme, or to sign up as a volunteer, e-mail: healthy_ageing@nuhs.edu.sg