SINGAPORE - As Covid-19 cases continue to climb, people here are more concerned about catching the virus.

Nearly half of the people polled in an online survey of 1,000 respondents have cut back on physical activities, and 73 per cent dine out less often.

All this has come at a cost to many. Mental health has declined since the Covid-19  pandemic began, with 76 per cent of the respondents here feeling sad or depressed, and 65 per cent feeling lonely.

As the pandemic continues, a good number of people polled also say they are willing to put up with trade-offs, such as longer waiting times for hospital treatment.

Nearly half of them - 42 per cent - are willing to wait longer for their turn to receive in-patient non-urgent care at hospitals, if they are full with Covid-19 patients.

More than half of them (52 per cent) are willing to do the same for outpatient non-urgent care.

The respondents are also least willing to put up with measures that impact their social life, such as limits on the size of household gatherings and dining in food and beverage (F&B) establishments, according to the survey commissioned by The Straits Times and conducted by market research firm Milieu Insight.

The poll was conducted from Sept 20 to 22, ahead of the latest rounds of measures announced on Sept 24 which kicked in on Monday (Sept 27).

The results are representative of the Singapore population 16 years old and above by age, gender and ethnicity.

In the same survey, more than half of the respondents think the Government has managed the situation well, and are willing to follow the mandatory restrictions.

Compared with a similar survey conducted in August 2020, the proportion of residents who are concerned about the number of new cases here has doubled to 70 per cent.

The proportion of those who fear catching the virus has also grown, from 37 per cent to 72 per cent.

These concerns come in the wake of a sharp spike in cases here, with the daily number rising to more than 1,000 over the past week.

From Monday, people are allowed to gather only in groups of two instead of five. Such tightened measures will last a month and will be reviewed in two weeks and adjusted, depending on the community situation.

More than 4 in 10 prepared to wait longer for hospital treatment if healthcare under strain: Survey

Unrealistic for curbs to go on indefinitely, say 63% of S'poreans in survey

Least willing to live with restrictions on socialising

They are least willing to live with measures that impact their social life, such as limits on the size of household gatherings (54 per cent) and dining in F&B establishments (50 per cent); as well as self-testing (45 per cent).

Eight per cent are willing to do so for more than one to two years, while 10 per cent no longer want to live with any restrictions.

Impact on lives and livelihoods

More than half (54 per cent) of those surveyed felt that Covid-19 has somewhat or definitely changed their lives for the worse.

They have consciously reduced outdoor and social activities, with 66 per cent shopping less often in physical stores since Covid-19 hit Singapore. They have also cut back on dining out and meeting in groups.

Eighty-five per cent have not travelled overseas since the pandemic started. As some countries reopen, 44 per cent foresee resuming their leisure travel some time in 2022. 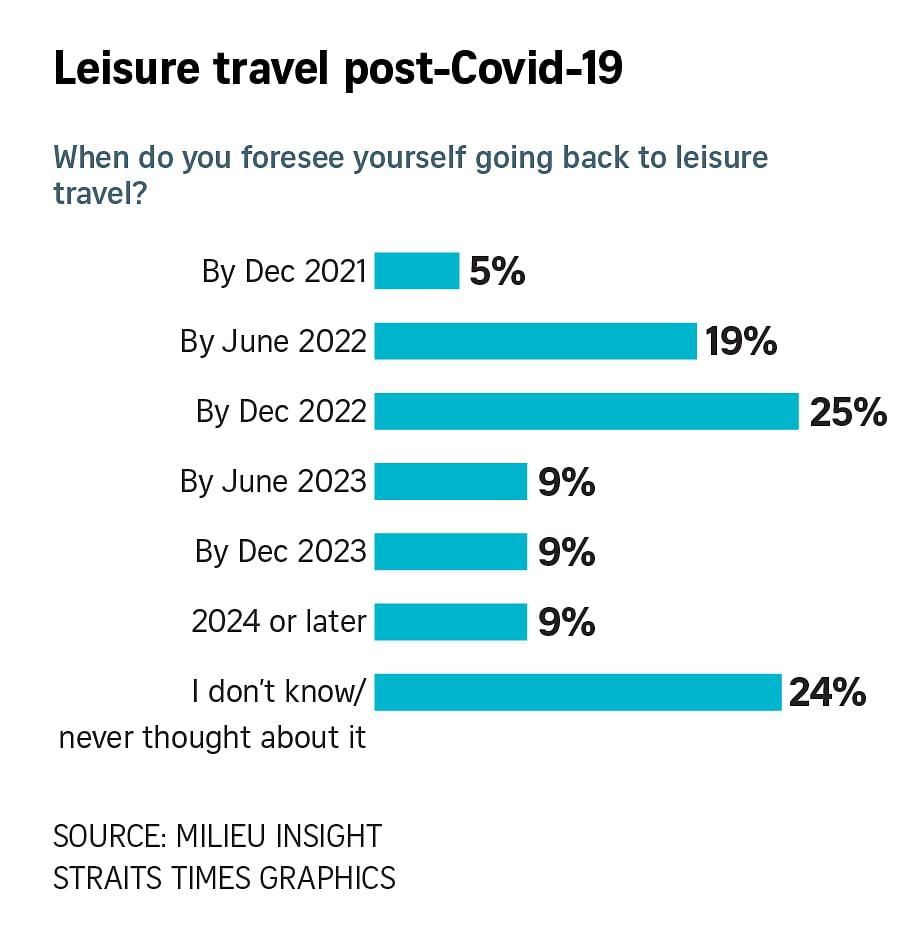 Thirty-seven per cent said their household financial situation has worsened, while 55 per cent said it has stayed about the same.

Only eight per cent said their household financial situation has improved.

Over one-fifth (22 per cent) had reached out for financial assistance. This came mostly in the form of government-funded support (90 per cent). Only 6 per cent turned to their relatives and employers for help.

Last Friday, Finance Minister Lawrence Wong announced that businesses such as F&B outlets and retailers will receive about $650 million in wage subsidies, rental waivers and other forms of support to help them cope with the tightened Covid-19 curbs.

The sum will be funded from the higher-than-expected revenues collected by the Government to date, with no further draw on past reserves, Mr Wong said.

The Jobs Support Scheme will be enhanced for sectors such as F&B, performing arts and arts education, and gyms and fitness studios.

Vice-president of the Association of Small & Medium Enterprises Ang Yuit said the additional support will help small and medium-sized enterprises (SMEs) weather the tightening of measures.

"Continued focus on building resilience via support for digitalisation and training, and streamlining compliance with safe distancing and testing would be important to help our frontline SMEs deal with the new normal," he added.

Changes to safety measures taking a toll on F&B businesses

The pandemic has gone on "a lot" longer than what 62 per cent of Singaporeans expected, the poll also revealed.

But more than half of the respondents are confident in the Government's handling of the pandemic so far, with 53 per cent of them saying the Government has managed the crisis well or very well.

Professor Dale Fisher, a senior infectious diseases consultant at the National University Hospital, said most Singaporeans have accepted their critical role in managing the pandemic.

"I believe there is trust, but that is also driven by the way instructions are communicated. They are based on the best available evidence and have translated to good results," he said, adding that trust has to be earned through consistency, empathy, clear messaging and a "resolve to do what is right".

National University of Singapore sociologist Tan Ern Ser said that while most Singaporeans understand the situation is evolving, the multi-ministry task force tackling Covid-19 should, if possible, provide a clear checklist of indicators which would allow it to declare the end of the pandemic.

"If that's not possible, then provide a tentative list and explain why so," said Prof Tan.

For how long are S'poreans willing to live with Covid-19 restrictions? | THE BIG STORY

The fight to live with Covid-19 continues, pause or no pause