5,000 changes found in epigenome, or DNA packaging, of people with autism

Singapore scientists have led groundbreaking research into the chemical workings of the brains of people with autism, which could pave the way for the first drug to treat the condition.

The researchers found certain chemical changes in the brain tissue samples they took from autistic people, compared with those of non-autistic people.

One of the reasons why there has been no drug developed for autism is that there are different causes that may give rise to the condition. This makes it hard to develop a drug that targets all autism cases.

With this new finding, however, that could change. 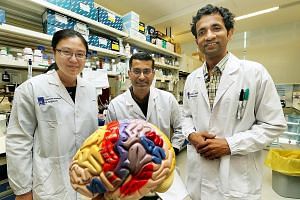 The study is published today in the prestigious scientific journal Cell.

Autism is a brain development disorder which affects about 1 per cent of the world's population. Previously, scientists had mostly looked at genetic mutations that cause autism - an estimated 100 of them - but the disorder remains poorly understood.

The Singapore-led group looked at the epigenome in the brain tissues of individuals with autism on a large scale.

The epigenome is a layer of molecules which tell the body's genes what to do. It can change according to lifestyle factors such as diet.

They took more than 200 frozen post-mortem brain tissue samples from 94 people, including 45 who were autistic.

They found that there were 5,000 changes in the epigenome or DNA packaging of people with autism.

What surprised the scientists was that these changes were mostly consistent across the tissue samples taken from individuals with autism. The discovery could pave the way for developing a drug to treat the disease in the future.

Development of epigenetic drugs to treat cancers and respiratory diseases, among others, is also under way.

Currently, only early intervention can help lessen the symptoms of autism.

"What we want is some addition to behavioural therapy which on its own will never make autism go away," said Dr Shyam Prabhakar, senior author of the study and associate director of integrative genomics at GIS. "We want drugs that would be able to treat autism."

According to not-for-profit charity the Autism Resource Centre (Singapore), there have been no accurate studies conducted in Singapore to establish the exact prevalence rate of autism here. Based on prevalence rates worldwide, the figure is likely to be around 1 per cent of the local population.

Dr Lim Boon Leng, a psychiatrist at Gleneagles Hospital, said the new finding will help in the understanding of autism.

"The cause of autism is basically still unknown," Dr Lim said.

He added that without real understanding of its cause, autism remains "impossible to cure".