If you are still searching for something sweet or special to complete your Christmas party offerings, here are some of the healthier, quirkier choices on the market.

Artisan bakery Bud of Joy, which sells goods made with organic ingredients, has four Christmas items on sale this year.

One of them, the Organic Christmas Nut Tart ($55), is made with several types of organic nuts, organic butter, organic raw honey and seeds and Himalayan rock salt.

Organic unbleached white flour is used, though a fully wholemeal version ($60) can be requested.

Parents should consider its gingerbread cookies if they want healthier treats, as these are fully wholemeal and do not have refined sugars or artificial food colouring. 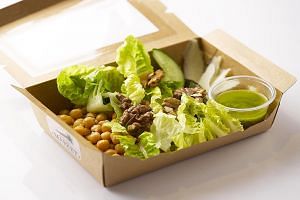 Have a merry feast and stay healthy too 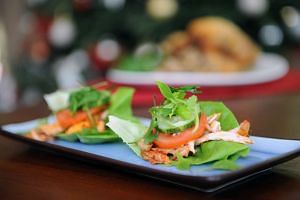 Give leftover turkey some oomph with sambal

In addition to organic ingredients, the gingerbread cookies ($3.40 for one, $11 for four) are made with aluminium-free baking powder.

The bakery also offers an organic Christmas log cake and organic fruit cake which has no alcohol.

Its owner-baker, Mr Lim Her-Yi, lists all the ingredients used and said its customers include people who want healthier options as well as those on special diets.

He started the bakery in February 2013 to cater to people like him who want food that is untouched by pesticides, chemical fertilisers, growth hormones and antibiotics, he said.

This may sound like an alien concept here, but decorated savoury sandwich cakes known as smorgastarta are very popular in Scandinavian countries.

The $75 cake is available until the end of the year, though Antoinette will take special requests for it.

Chef Pang said it will keep for three days in the fridge, but "strongly recommends that it be consumed on the day itself so the bread doesn't dry out". He first introduced savoury sandwich cakes earlier this year, for Father's Day.

These cakes are free of gluten - a protein that can be found in grains like wheat, rye and barley.

People with celiac disease cannot eat gluten as it causes inflammation in their small intestines.

The Living Cafe in Bukit Timah Road, which is known for its raw food menu, has two raw Christmas sweets that are gluten free, in addition to being dairy and egg free.

One is a Raw Lemon Pistachio and Cranberry Tart ($84++ whole) and the other, a Raw Velvet Cake ($60++ whole). Order three days in advance. Raw food is uncooked, unprocessed food.

The Bakery Depot chain also has a flourless chocolate log cake ($52) for Christmas, which has remained popular for the past seven to eight years, a spokesman said.

You can easily put together a salad, but if you want something more sophisticated, buy one from new gourmet deli Saint Pierre Market in Ngee Ann City. The deli by the Emmanuel Stroobant Group sells a salad that is good for about 10 people ($68).

Order three days in advance and choose from different flavours such as the Chef's Favourite with chickpeas, romaine lettuce and walnuts, a kale soba salad and more.