SINGAPORE - When Madam Ng Chong Poy, 74, found out late last year that she had dementia, she became moody, and said she did not want to live anymore.

Her eldest son, Mr Raymond Shong, was at his wits' end trying to pacify her while he learnt about the syndrome, which is marked by progressive deterioration in memory, thinking, behaviour and the ability to perform everyday activities.

But help was at hand, when her doctor referred the family to a new programme that offers hand-holding support to those newly diagnosed with dementia.

Calling it a godsend, Mr Shong, 51, a tuition teacher and a father of three, said the programme has helped improve his mother's mood and lessened his stress considerably.

The programme, announced at an online press conference yesterday, is Singapore's first post-diagnostic dementia support plan. Launched with $2.6 million from the Lien Foundation to defray the costs for those being helped, Post Diagnostic Support (PDS) was developed by the foundation and the Alzheimer's Disease Association (ADA).

Following a pilot at Tan Tock Seng Hospital (TTSH) and Khoo Teck Puat Hospital (KTPH) last year, PDS will also be available for suitable patients at the National Neuroscience Insitute in a month or so.

A total of 186 people are now on PDS, including 126 from the TTSH Memory Clinic and 60 from the KTPH Geriatric Centre.

With PDS, help can be a call away. A dedicated case worker will make one or two initial home visits and regular phone calls throughout at least a year. Caregivers on PDS are given a mobile number which they can call for advice and support, should they require it.

People can experience identity loss, a lot of uncertainty and a sense of helplessness when first told they have dementia.

Dr Noorhazlina Ali, a senior consultant at TTSH's centre for geriatric medicine said yesterday PDS can help those newly diagnosed with dementia and their caregivers come to terms with the diagnosis, and address caregiver burden and burnout.

The head of ADA's Caregiver Support Centre Stephen Chan said PDS empowers the person with dementia and his caregiver to have better quality of life, instead of "waiting for something bad to happen".

Living with dementia - a guide to a better home

He said sometimes caregivers can panic and rush their charges to the emergency department as they cannot cope with the aggression in the person with dementia.

"For example, when a person with dementia has memory loss and this worsens... they get anxious when doing simple tasks like bathing or even cooking, which can become very complex," he said.

Usually, the first thing people do is to stop the person with dementia from doing "risky activities" when the focus should be on how to support them so that they can continue to cook or do an activity they like.

Senior social worker Eileen Lee said they helped a family find ways to manage a member with dementia, after the elderly woman forgot she had a new helper and thought the helper was a stranger who might steal her things.

Mr Shong said the PDS case worker helped his mum manage her anger and helped him understand how dementia can affect a person.

"I feel that there is another pair of helping hands," he said.

"Now, when she starts to show signs of frustrations and stares at me, I will just back off. Before that, I would ask her, 'why are you staring at me? I am just talking to you nicely.'"

Ms Lee, one of five full-time case workers on the PDS team, said each client will have a customised care plan when they leave the programme.

It may spell out the kind of care the person may wish to have in the future. For instance, someone with a sweet tooth might like an ice cream when he is moody. Another may give his children permission to place him in a nursing home when they cannot cope anymore.

For about three more years, while PDS is being funded, it will be offered free of charge to some 1,400 persons with dementia in total. The PDS team may be boosted later on with two to three case workers.

To get on PDS, patients must be referred by a doctor. 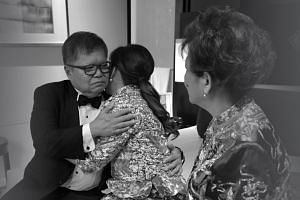 Wrestling the monster: A man, his wife and dementia in between

The ADA said it is reaching out to the other hospitals, though it is limited by how many people it can help.

Mr Chan said PDS is modelled after a similar programme in Scotland, which entitles everyone diagnosed with dementia to at least a year of post diagnostic support.

"We want to be able to reduce the caregiver burden and stress... and the crisis situations that could escalate admission to hospital and nursing homes," Lien Foundation's chief executive Lee Poh Wah told The Straits Times.

"If we do it well, we'll prevent unnecessary suffering, improve quality of life and reduce healthcare and societal costs."