SINGAPORE - When it comes to how prepared countries are for major infectious disease outbreaks, Singapore ranks below Thailand and Malaysia, and above than Indonesia, according to the Economist Intelligence Unit.

Its Global Health Security Index released on Friday (Oct 25) found that no country is fully prepared for a pandemic, with only 13 countries in the world, including Thailand and South Korea, "most prepared".

Singapore, ranked 24th out of 195 countries, falls into the next category of nations that are "more prepared" for such outbreaks.

The United States was ranked the top country, followed by Britain and the Netherlands.

The area that pulled Singapore's score down was its commitment to improving national capacity, financing and adherence to norms. For this, it was placed in the bottom half of countries, at number 101.

It scored best for its ability to rapidly respond to, and mitigate, the spread of an epidemic, standing 11th in the world.

At the other extreme, it got zero marks for cross-border agreements on public and animal health emergencies, communication with healthcare workers during an emergency, exercising response plans and, under the prevention section, the "dual-use of research and culture of responsible science". 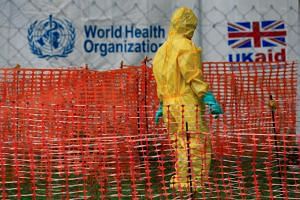 World at risk of pandemics that could kill millions, panel warns

Malaysia ranked 18th while Indonesia came in at 30th place.

Thailand, ranked sixth, was the only non-high income country to make it to the top tier.

The report gave the example of how Thailand was able to stop the Middle East Respiratory Syndrome (Mers) from spreading in 2015.

It had affected 186 people in South Korea and killed 38.

In June that year, Thailand confirmed and immediately notified the World Health Organisation that it had an imported case.

The report said: "Thailand was able to stop its first Mers case - and each subsequent confirmed case - with no further spread.

"Thailand's success in identifying and stopping Mers is just one example of both the value of health security capacity building and the critical role that a strong healthcare system can play in stopping outbreaks at the source."

It added that “Thailand is, beyond a doubt, an international leader in health security”.

The health index took 2½ years to finalise, with more than 100 researchers and reviewers involved.

Ms Priya Bapat, the study’s project manager, said: “We hope the index will be a tool for leaders to make effective policy decisions.”

To ensure the accuracy of the index, the EIU said all countries were provided with an opportunity to review and comment on the preliminary results.

When asked for a comment, the Ministry of Health said the World Health Organisation had last year “agreed that Singapore has demonstrated strong leadership and a highly developed capacity to detect and respond to potential public health emergencies”.

The spokesman added: “Nevertheless, we will continue to strengthen our capabilities to prevent, detect and respond promptly and effectively to public health threats, and address any gaps that may exist.’’