A wearable cooling device that can help protect a patient's brain and other vital organs following a cardiac arrest has been developed by doctors from Singapore General Hospital (SGH) and an industry partner, Global Healthcare SG.

The CarbonCool suit, as it is called, consists of a wearable suit made of neoprene and thermoplastic polyurethane. It holds 20 cooling pads filled with a graphite water solution that is about 15 times more thermally conductive than ice.

At a press briefing yesterday, Professor Marcus Ong, a senior consultant and clinician scientist at SGH's Department of Emergency Medicine, said: "When a person's heart stops beating, there is no blood flow or oxygen supply to vital organs like the brain, liver and kidneys for a prolonged period of time.

"Research has shown that cooling the body to about 34 degrees is one of the best ways to preserve brain function after cardiac arrest."

The process, called targeted temperature management (TTM), would be initiated after a patient's heart has been restarted, for instance, by paramedics called to an emergency.

Prof Ong said that the faster the body can be cooled to the target temperature, the more likely it is that the patient will regain good brain function, or, in other words, be able to walk, talk and return to work after recovery.

A study by researchers from SGH, National University of Singapore and National Heart Centre Singapore found that the CarbonCool suit can cool a patient's body to 34 deg C in an average of 73 minutes, said SGH senior clinical research coordinator Nur Shahidah Ahmad, the study's main author.

Other methods, such as administering cold water, ice packs and chilled intravenous saline, took an average of 142 minutes, she said.

Prof Ong, a co-author of the study, said these methods have disadvantages - water and ice packs can be messy, and giving a patient too much intravenous fluid can cause other complications.

While other commercial cooling machines exist on the market, they are relatively expensive. 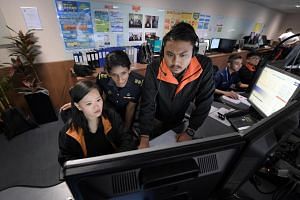 Learn how to do basic CPR at a kiosk... in minutes

A machine that circulates coolant in a single-use wearable suit is used in the hospital's intensive care unit, but it costs about US$1,000 (S$1,350) per use, said Prof Ong. The machine is also bulky and cannot be used effectively in an ambulance.

In comparison, the CarbonCool suit can be packed into an insulated backpack, and costs just US$100 for each use, Prof Ong said.

The suit can be disinfected after use and the cooling pads can be removed and refrozen for repeated use, Ms Shahidah said.

She added that it does not have to be removed when a patient undergoes X-ray scans, computed tomography scans or magnetic resonance imaging.

The study tracked 124 patients seen at the hospital's emergency department between 2010 and 2017.

Since 2015, the proportion of patients who regained good brain function after cardiac arrest has risen to 60 per cent from 20 per cent to 30 per cent previously, Prof Ong said.

The suit has other applications, such as treating heat stroke, and firefighters could also potentially use it to keep cool, he added.

The Straits Times understands that some Singapore Armed Forces ambulances currently use the suit to treat soldiers with heat injury.

The study team will present its findings at SGH's annual scientific meeting tomorrow.

The team is also looking into using a titanium-based compound for the next version of the suit, Prof Ong said.