When it is fully open, Sengkang General Hospital (SKH) will significantly bump up the total number of public-sector acute beds from just over 8,600 now.

But after the next public general hospital is opened in Woodlands in 2022, the Ministry of Health (MOH) will take a pause to plan for future needs, Health Minister Gan Kim Yong said.

SKH will start with 260 beds and increase the number to 500 in six months.

The 400-bed Sengkang Community Hospital (SKCH) attached to SKH will open later on Aug 28, as it takes a while for patients from the general hospital to need rehabilitation at a community hospital.

Announcing the dates at the SKH Campus Community Health Fair on Saturday (Aug 11), Mr Gan said: “As our population ages, we will see increased demand for healthcare services.

“The Government has been building more healthcare facilities across various sectors to meet this growing demand. Since 2011, we have added 1,700 acute hospital beds and 1,200 community hospital beds.”

The Sengkang hospitals will add another 1,400 beds to this, he said.

They are part of the new batch of public general hospitals, starting with the 660-bed Khoo Teck Puat Hospital in Yishun in 2010, and the 700-bed Ng Teng Fong General Hospital in Jurong East in 2015. The one in Woodlands with 1,400 beds is scheduled to open in 2022.

Speaking to the media on the sidelines of the event, Mr Gan said the MOH will take a pause to take stock after the opening of the hospitals in Woodlands.

Singapore faced a massive bed-crunch in 2013-2014 when patients had to be housed along corridors and in converted carpark areas, as public hospitals struggled with full occupancy. Rates now hover around 90 per cent. 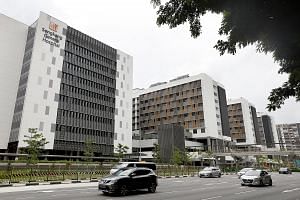 Dr Lam said the additional 1,000 acute hospital beds at SKH, which he expects to be fully opened within the year, will help with the rising demand for hospital care.

More importantly, he said: “SKH will relieve the bed situation at Khoo Teck Puat Hospital (KTPH) and Tan Tock Seng Hospital (TTSH), since many of the residents now go to them. They are facing quite high occupancies.”

Professor Christopher Cheng, chief executive officer of SKH, said should there be a surge in demand in future, the two hospitals can add 200 to 300 more beds to the 1,400 they now have.