A 64-year-old Singaporean man who works as a bus driver for Tanglin Trust School was one of nine new cases linked to the cluster at 115 Bukit Merah View Market and Food Centre yesterday.

This cluster is now the largest open one to date with 65 cases, exceeding that of the Jem and Westgate cluster, which has 63 cases.

The Changi Airport Terminal 3 cluster, which had 108 cases, was closed yesterday after no new cases were linked to it for the past two incubation periods, or 28 days.

The Ministry of Health (MOH) said in its daily update last night that the fully vaccinated bus driver, who is employed by KAL Transport, stays in the Bukit Merah area and frequently visited the food establishments in the area.

He developed a fever, cough and fatigue on Wednesday and sought medical treatment at a general practitioner the next day, where he underwent both an antigen rapid test (ART) and polymerase chain reaction (PCR) test.

The eight other cases linked to the Bukit Merah cluster include four who were diagnosed while serving quarantine.

They include a five-year-old boy and a four-year-old girl, both of whom are students at PCF Sparkletots at 78A Telok Blangah Street 32. The children had last gone to school on May 21, said MOH.

Both are family members of earlier reported Covid-19 cases and tested positive for coronavirus infection while in quarantine.

The other four cases linked to the Bukit Merah cluster were detected through surveillance.

One of them was a 42-year-old female Myanmar national, a foreign domestic worker who had visited the market and food centre.

MOH said she developed a cough, runny nose, sore throat and headache on Wednesday and sought medical treatment the next day.

She was immediately isolated when her ART result came back positive for Covid-19. Her PCR test result confirmed the Covid-19 infection yesterday.

They include a fully vaccinated Chinese national, 69, who is a resident at NTUC Health Senior Group Home in Bukit Merah View.

He was tested for Covid-19 on Wednesday as part of the home's surveillance testing for residents, and his pooled test result came back positive on Thursday.

An individual test was administered, and he developed a runny nose on the same day, MOH said.

His individual test result later came back positive for Covid-19 infection on Thursday.

Other than the four unlinked cases and nine linked to the Bukit Merah cluster, the other case of locally transmitted Covid-19 is a Singaporean woman, 59. She is linked to two earlier reported cases of Covid-19 - a 68-year-old male Singaporean who works as a landscape gardener at Amozonia and a retired Singaporean man, 66.

There were two imported cases confirmed yesterday as well, for a total of 16 new cases. These took Singapore's total to 62,382.

There are currently 152 confirmed cases who are still in hospital. Of these, most are stable or improving, and one is in critical condition in the intensive care unit.

Another 209 are isolated and cared for at community facilities. These are those who have mild symptoms, or are clinically well but still test positive for the virus. 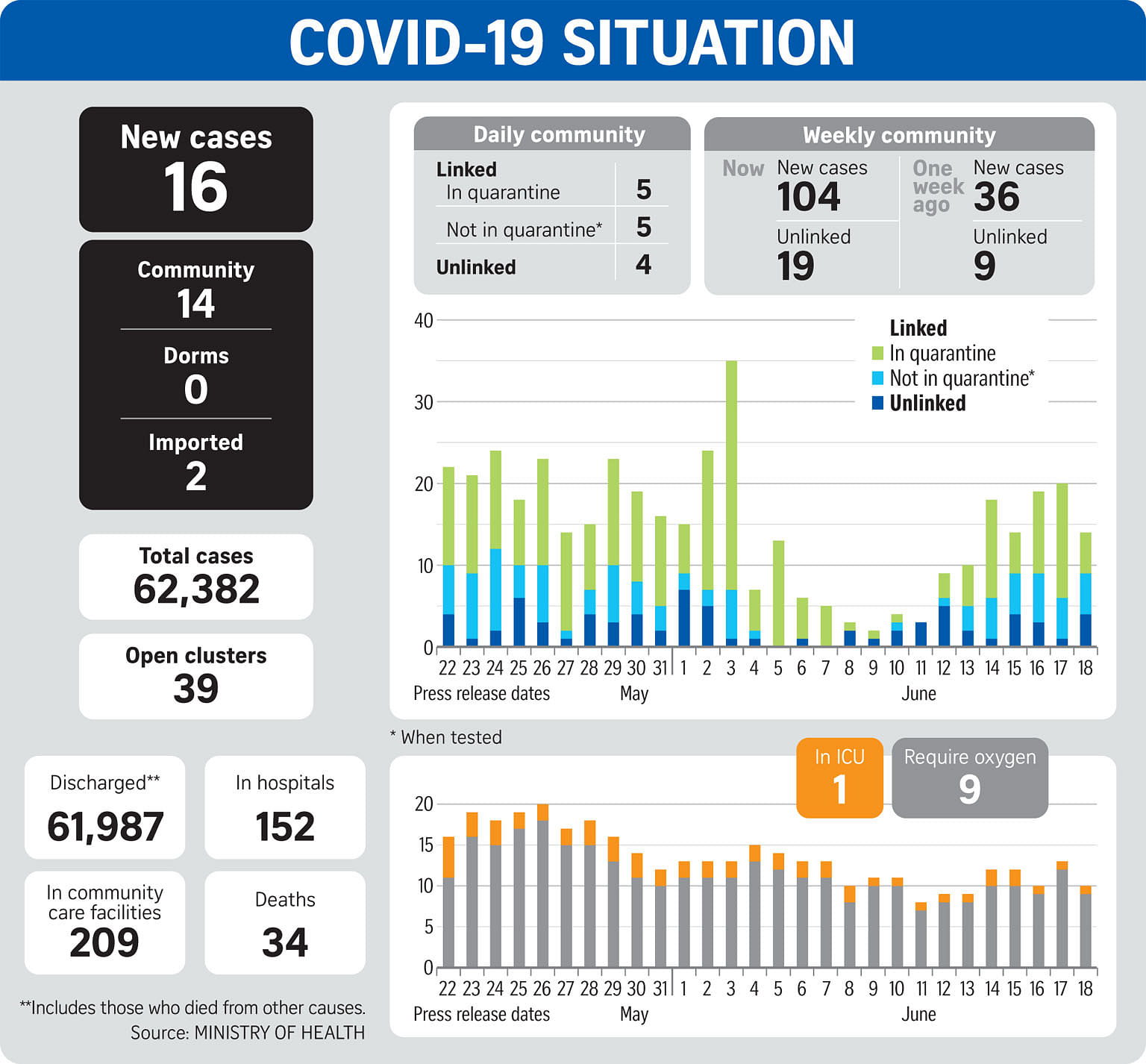