The Singapore National Eye Centre (SNEC) will revise its fees on March 1 to ensure they remain affordable, the centre and the Ministry of Health (MOH) said in letters to The Straits Times Forum Page yesterday.

The letters are in response to the case of patient Seow Ban Yam, 82, whose MediShield Life payout of just $4.50 was the subject of an ST report and commentary that attracted strong comments from readers.

"SNEC recognises that it could do more frequent cost reviews to close prevailing gaps between current cost burden of patients and what it charges for financial sustainability," said its chief operating officer Charity Wai.

"With the latest review of SNEC's charges to better align a wider range of procedures with Medisave and MediShield claim limits, patients requiring complex operations of higher surgical table codes will see reduced charges, including that which Mr Seow underwent."

In its letter, MOH said that SNEC's charges are being reviewed to ensure they remain affordable, including for operations such as the one Mr Seow underwent to unblock the flow of his tears.

"We stress that no Singaporean will be denied essential healthcare treatment due to inability to pay,"said Ms Lim Siok Peng, director of the ministry's corporate communications division. "The Government provides significant subsidies of up to 80 per cent to keep healthcare costs low, and all Singaporeans are protected against large healthcare bills through MediShield Life."

The articles, by ST senior health correspondent Salma Khalik, threw the spotlight on the disparity between subsidised surgical fees and the claimable amount from MediShield Life. Mr Seow's subsidised bill at SNEC for surgery to unblock the flow of his tears was $4,477, but only $3,005 was claimable. 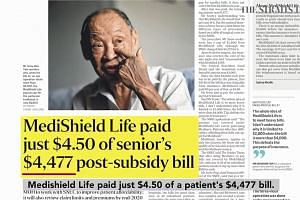 SNEC, in its letter, said that the surgery Mr Seow underwent - a duct drainage operation - is uncommon, with only seven cases out of the 42,000 procedures it performed in 2017.

ST's commentary had questioned whether a national referral centre should need, and be allowed, to charge substantially more than public hospitals for a treatment that both do, and asked if patients at these specialist centres are subsidising the cost of their research.

SNEC said that its budget for research and education is funded separately by government grants, philanthropy and other income totally unrelated to clinical revenue from subsidised patients.

The commentary also asked whether public institutions like SNEC are charging too much, if the government subsidy to these places is insufficient or if the claimable amounts under MediShield Life are set too low and do not reflect real costs.