1. What is Group B Streptococcus bacteria (GBS)?

It is a bacterium commonly found in the gut and urinary tract of about 15 to 30 per cent of adults without causing any disease. But it may occasionally cause infections of the skin, joints, heart and brain. It can lead to meningitis, which is an inflammation of the membranes surrounding the brain and spinal cord.

Having chronic conditions, such as diabetes, put people at a higher risk of getting GBS infections.

2. If GBS is a common bacteria, why is it that some people have fallen so ill after being infected? 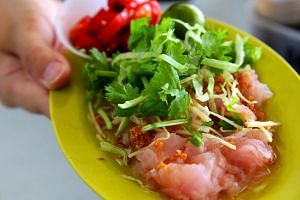 The serious cases this year have been found to be associated with a particular strain of GBS known as Sequence Type 283 (ST283). Although this strain is not fully understood as yet, it is believed to be more aggressive than others.

There are many different strains of GBS, not all of which have been fully studied. However, these bacteria are generally not considered food-borne pathogens.

3. Are some people more prone to infection?

In general, newborns and people with poorer immunity, such as those who have diabetes, cancer and HIV, are usually more vulnerable to the infection, say doctors. But the cases this year affected both young adults and the old.

Traditionally, GBS infections have been associated with pregnancy as mothers who are carriers of the bacteria may pass it to their babies during birth.

4. What are the symptoms of GBS infections and how can they be treated?

The most common symptom of infection is a fever, said Dr Leong Hoe Nam, an infectious diseases specialist with Mount Elizabeth Novena Hospital.

It is important to recognise and treat it early, said Dr Leong, adding that it can be treated with common antibiotics such as penicillin.

Other more serious symptoms include infection of the joints, brain, lungs and other soft tissue in the body. The kind of symptoms a person has depends on the site of the bacterial infection.

5. Why is NEA only banning the use of freshwater fish in ready-to-eat raw fish dishes? Is it safe to eat sashimi? 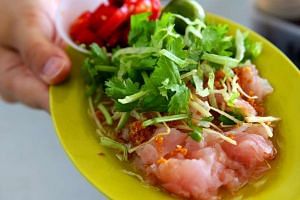 What you need to know about GBS infection

Tests conducted by the Agri-Food & Veterinary Authority of Singapore (AVA) and NEA have found freshwater fish to have significantly higher bacterial contamination than saltwater fish, and are likely to present higher risks of infection when consumed raw.

Fish used for sashimi are of the saltwater variety and are usually bred or harvested from cleaner waters.

6. How would I know what kinds of raw fish are safe to eat?

You should make sure that the people you are buying from handle raw fish separately from other raw food that is meant to be cooked. For example, they should have separate counters, chopping boards, and knives to prepare fish meant to be served raw.

7. Were poor hygiene practices of hawkers the cause of the GBS outbreak earlier this year?

It is unlikely. The stool samples of 82 food handlers and fishmongers were tested, and none of them were positive for the specific strain of GBS associated with the outbreak.