People must try to stay healthy even as system improves, he says

Singapore is pumping in more money than ever on healthcare, but continued spending at current rates will not be sustainable.

The most effective way to keep healthcare affordable is for people to stay healthy, as unhealthy lifestyles are taking a toll on the system and affecting quality of life as Singaporeans age.

Speaking yesterday during the debate on his ministry's budget allocation for the year, Health Minister Gan Kim Yong shared that since 2010, national healthcare spending had almost doubled, from $11 billion to reach $21 billion in 2016.

Subsidies given out had also risen from $2.6 billion to $5.6 billion, pushing up government health expenditure, which increased to 2.4 times - from $3.9 billion to $9.3 billion.

"It is unsustainable for us to continue increasing our national healthcare expenditure at this current rate," Mr Gan said.

Healthcare manpower and infrastructure has been ramped up.

Medical school intake has gone up from 300 to 500 a year, and the latest nursing intake of more than 2,100 students is a record high.

The most effective way to keep healthcare affordable is to stay healthy.

HEALTH MINISTER GAN KIM YONG, on how individuals have to do their part to keep healthy.

Seven new hospitals have been built, adding a total of 3,800 beds when fully opened.

But this trajectory cannot be sustained, he said. Individuals have to do their part in keeping healthy, and the healthcare system has to transform the way it delivers care.

An ageing population is only one part of the problem.

While people here are living longer, "for every 10 years we live, we spend more than a year in illness", said Mr Gan.

Life expectancy here had gone up to 84.8 years in 2017. The years lived in good health had also increased to 74.2 years.

"These figures also show that we are living about 10 years of our life in ill health," Mr Gan said.

For every 10 years we live, we spend more than a year in illness.

MR GAN, who shared this even as he noted that people here are living longer, with life expectancy going up to 84.8 years in 2017 and the years lived in good health increasing to 74.2 years.

Dr Chia Shi-Lu (Tanjong Pagar GRC), head of the Government Parliamentary Committee for Health, had expressed disappointment that Singapore, once ranked the healthiest country in the world, had fallen to eighth place this year.

Mr Gan acknowledged that Singapore needs to work harder in its fight against chronic diseases.

Deaths from cancer, stroke and heart diseases had fallen by 16 per cent between 2010 and 2017 as a result of "early prevention, better treatment and disease management, which have contributed to our increase in life expectancy".

But he said that the prevalence of diabetes, high blood pressure and high cholesterol levels here had gone up by 4 per cent, 14 per cent and 33 per cent, respectively, among adults aged 18 to 69 between 2010 and 2017.

He said: "This is partly due to an older population, but also to unhealthy lifestyles and habits." 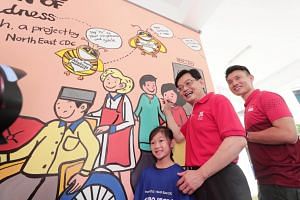 Singaporeans' average life expectancy to reach 85.4 years in 2040, third-highest in the world: Study

Finding a cure for rising costs in healthcare

And while individuals need to get their act together, healthcare institutes too have been changing the way they treat patients.

An experiment by the National Healthcare Group polyclinics, where a team of medical and non-medical personnel looks after about 5,000 patients with chronic diseases, has resulted in improved outcomes, he said.

Polyclinics in the other two clusters are now following suit.

New ways to manage patients are also being tried out at the hospital level. About 4,000 patients have benefited from Alexandra Hospital's integrated model. This is now moving into the next phase, where it integrates hospital care with community services.

Mr Gan said: "But the most effective way to keep healthcare affordable is to stay healthy."

More help for those discharged from youth homes

Old Bukit Timah fire station to be spot for recreation

Assisted living with care services for seniors in the pipeline