Ten general practice (GP) clinics, all part of Access Medical, have been referred to the police for suspected cheating.

While these clinics claimed for government subsidies under the Community Health Assist Scheme (Chas), there are doubts over whether all the treatments were actually provided.

The Ministry of Health (MOH), which called in the police, will also be asking the Singapore Medical Council (SMC) to look into the behaviour of some doctors from these clinics. The SMC serves as a watchdog for the medical profession here.

A statement from the MOH yesterday said audits of the 10 clinics, scattered around the country, "have revealed severe non-compliance".

It added: "These clinics had, over a period of time, variously made numerous non-compliant Chas claims, such as claims for patient visits or chronic conditions, with no relevant supporting documentation."

The MOH had suspended three GP clinics last year and two dental clinics in 2016, and also referred the cases to the police.

The police told The Straits Times yesterday that they are looking into MOH's complaint.

The 10 Access Medical clinics will be suspended from Oct 23 as the ministry is obliged to give them 15 days' notice before cutting them off from making Chas claims.

"We remind all doctors to act in the best interest of the patient and uphold the highest standards of professionalism."

Prof Ong said the ministry closely monitors claims from clinics, and will not hesitate to take action when it discovers "significant non-compliance". 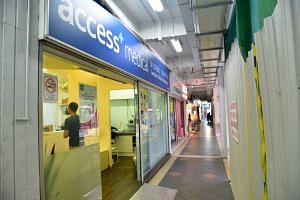 Chas to be extended to all Singaporeans with chronic ailments

In the case of Access Medical, MOH said it had received feedback from the public about its clinics' practices.

About 1.3 million people are entitled to government subsidy at 1,000 GP and 700 dental clinics under Chas or the Pioneer Generation Package for medical and dental treatments.

Last year, MOH gave out $154 million in Chas subsidies to about 650,000 Singaporeans. This was lower than the $169 million given out the previous year.

Prime Minister Lee Hsien Loong announced during his National Day Rally speech this year that Chas benefits will be extended to all Singaporeans with chronic ailments.

Currently, only people from households with per capita income of $1,800 or less are entitled to Chas subsidies, which apply to both acute and chronic medical problems.

Singapore has 450,000 people from the Pioneer Generation, born in 1949 or earlier, who are entitled to even higher subsidies. For example, they can get up to $540 a year in subsidy if treated at a GP clinic for complex chronic conditions. Other Chas holders get less.

Once suspended, clinics cannot make Chas claims for their patients. But they can continue operating and offer their normal services.